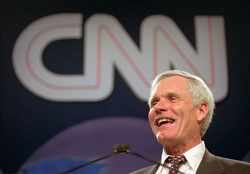 A hundred cities woke up today to broken glass on the sidewalks, burned-out buildings, vulgar and threatening graffiti sprayed on buildings and streets. All this while a pandemic has claimed 106,000 American lives and strictures intended to stem the pathogen’s spread have crashed the U.S. economy. Meanwhile, none of these interlocking crises have made our leading civic institutions any less partisan, apparently, and that includes the media.

Do you recall when the 24-hour news cycle was envisioned as a technological advancement that would keep Americans better informed? Well, cable news has the wherewithal to do just that, but there are business considerations at play that mitigate the good, along with human considerations: political bias, personal pettiness, and the pressures of competition. Much of that was unforeseen 40 years ago today when Ted Turner launched CNN.

The first challenge, of course, was to be profitable. By the time of CNN’s launch, Turner didn’t need the money — he was a billionaire when that was rare — but it needed to attract enough viewers and advertisers to justify the tremendous cost of fielding news crews around the country and the world, support a vigorous Washington bureau, and a home base in Atlanta.

Skeptics abounded. Was there even enough news? A New Yorker cartoon from the early days illustrated the problem: It depicted a dead bird, its feet in the air, with a CNN camera crew on the spot. “A sparrow falls,” read the caption, “and CNN goes live.”

In truth, those at the network’s creation knew right away they were on to something. Three days before the its launch, civil rights leader Vernon Jordan had been wounded in an attempted assassination. On June 1, President Jimmy Carter visited Jordan in the hospital — and spoke to CNN’s cameras as he emerged.

“You know,” CNN script copy editor Randy Harber thought to himself, “this is going to work.”

Sometimes, it worked too well, such as on Jan. 28, 1986 when the Space Shuttle Challenger exploded in midair, and CNN anchors and correspondents found themselves trying to explain to Americans, including many children, why six astronauts and a popular schoolteacher were never coming home to their loved ones.

A milestone event came during the Persian Gulf War. By then, CNN had been meeting the challenges of live, 24-hour television for a decade, and proving itself up to the task. The established networks broke into their regular programming when the shooting started, but only CNN had a team on the scene at Baghdad’s Rashid Hotel when the airstrikes began.

In a free country, success will spawn imitators, and so it was with CNN. By 1989, Europe’s Sky News was on the air 24 hours a day and by the mid-1990s Rupert Murdoch — who owned Sky News — decided to give CNN a run for its money. Fox News Channel promised even higher production values than its rival, and something else as well: an ideological correction. “Fair and balanced” was the slogan coined by Roger Ailes, but this was said with a wink and a nod. What it really meant was that Fox News was going to offer ballast in a media marketplace dominated by liberal sensibilities. At first, CNN ignored the usurper, even as conservatives took to trolling CNN as the “Clinton News Network.”

Eventually, as Fox News consistently attracted more viewers than CNN and upstart MSNBC combined, a change of heart occurred. In the presidential 2008 campaign, MSNBC had emerged as the liberal alternative — it was the Barack Obama network, if you will. Later, many observers would still view CNN as pro-Clinton even though a different Clinton was running for president. And Fox News remained reliably Republican in its orientation.

By 2013, none of this could be ignored. Writing in Politico, media critic Dylan Byers began an analysis of the problem with a provocative opening sentence aimed at the D.C. chattering class: “This is the quickest way to turn a pleasant dinner party into a shouting match: Posit that MSNBC is not as bad as Fox News, but rather worse than Fox News.”

Objectively, MSNBC was by then much worse than Fox, if one believes the mission of the news business is to offer facts rather than propaganda. An exhaustive Pew Research Center Study done earlier that year showed the 85% of MSNBC’s programming was devoted to opinion and only 15% to reporting. At Fox, the ratio was much better — 55% opinion, and 45% news. CNN hadn’t yet reached the 50% tipping point, but it was getting close. By the time of Donald Trump’s election, it would — without ever admitting it — throw in the towel and join the Resistance.

On Sunday, as the NYPD tried to quell riots — and CNN’s Atlanta headquarters was being defaced by protesters — the news channel’s president, Jeff Zucker, let it slip that he is thinking of running for mayor of New York. Although this speculation isn’t new, it set off the predictable kvetching in conservative circles. You know, about Mike Bloomberg’s conflicts of interest as the founder-of-Bloomberg-News-turned-mayor-turned-2020-Democratic-presidential-candidate. And about whether the Democratic Party would owe Zucker back pay — that sort of thing. But this critique misses the mark. The great British journalist Charles Prestwich Scott was a liberal member of Parliament before assuming ownership and editorship of the Manchester Guardian. But the man still knew what a news outlet was for.

Ninety-nine years ago this spring, he penned an essay long considered the gold standard for independent journalism. The primary goal of the media, Scott asserted, was accurate reporting. “Comment is free,” he wrote, “but facts are sacred.”

Carl M. Cannon is the Washington bureau chief for RealClearPolitics. Reach him on Twitter @CarlCannon.