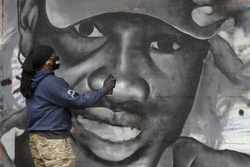 It’s hard not because of coronavirus or the quarantine, economic stress or any of the other pressures families across America are feeling right now. It’s hard because on Feb. 23, her son, that special Mother’s Day gift, was gunned down by strangers. He was unarmed, out for a jog. She will never hug her son on Mother’s Day again. Or any other day.

Cooper-Jones found this out when an investigator for the Glynn County Police Department in Georgia called and told her that her son had been involved in a burglary and when the homeowners confronted him, there was a struggle and Ahmaud Arbery was killed.

Of course, that’s not what happened. What really happened was that two white men, Gregory and Travis McMichael, saw Ahmaud jogging in the middle of the day, grabbed a .357 Magnum and a shotgun, chased him down in their pickup truck and shot and killed him.

Instead of a family dinner filled with laughter and memories, a poorly wrapped present, flowers or even an awkward phone call, Wanda Cooper-Jones has only grief, agonizing questions with no answers — and a cellphone video that shows her son’s senseless slaying, a video she cannot bring herself to watch.

There’s Sybrina Fulton. Her son, Trayvon Martin, was only 17 when George Zimmerman stalked and killed him in Sanford, Fla.

There’s Samira Rice, whose 12-year-old son Tamir was shot and killed by police officer Timothy Loehmann, in Cleveland. They said he had a gun, too. It was a toy.

Judy Scott mourned her son Walter, killed by North Charleston, S.C., police officer Michael Slager in 2015, until she passed away earlier this year.

The list grows longer every day, and that’s not even counting the needless deaths that result from casual violence and poverty epidemic in communities of color. That’s not counting how the current pandemic disproportionately impacts black and brown families. That’s not counting the fact that infant mortality is twice as high for black children as white, or the threat black women face as maternal mortality rates rise.

How many black and brown mothers dread the grief of Mother’s Day instead of reveling in its glory? How many more will face that tragedy before we do something? As a child I never understood what the preacher meant on Mother’s Day Sunday when he spoke to the women who raised us, kept us, nurtured us and have never forgotten about us. I never understood the debt he described — the debt we would always owe.

I do now, even though this Mother’s Day is different because we are not sitting in the pews on Sunday as we normally would. We will not get to wear the red flower on our “church clothes” (as we say where I am from) symbolizing a living mother, or white flower to indicate a mother who may have transitioned from labor to reward. We won’t pack those favorite restaurants or picnic together as the children laugh and play in the yard. We won’t get to do any of the things we’re used to.

Yet, for most of us, those joys will return. But some will never feel the joy of Mother’s Day glowing in their hearts ever again. There are some for whom that brilliance will be forever spoiled by grief.

Antjuan Seawright is a Democratic strategist, founder/CEO of Blueprint Strategy, and a CBS News political contributor.