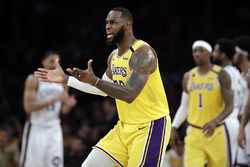 Three years ago I wrote here that the NBA Mt. Rushmore, that is the four greatest players of all time, is a no-brainer, using the criteria of at least four NBA championships and three Most Valuable Player awards.

The only four stars in NBA history who make this cut are Michael Jordan, Kareem Abdul-Jabbar, Bill Russell, and Magic Johnson. I am not the first or only one to suggest this Rushmore constellation — including, most recently, former NBA star and ESPN analyst Jalen Rose.

But with ESPN’s “The Last Dance,” about Jordan’s last championship season with the Bulls, we thought it might be worth a second look at how to measure the best of the best based on the metrics we presented three years ago.

The ring/MVP criteria offer a measure of the best players on the best teams. Only four make the Rushmore cut (at least 4 rings and 3 MVPs), and only four more can claim at least three rings and two MVPs. That’s it: eight players. And some good news is that two of those eight, LeBron James and Stephen Curry, are still playing — that is, when NBA play resumes.

Even among the top 4, Jordan stands out. He went 6-0 in the NBA Finals and won 5 MVP awards with the Chicago Bulls. He averaged 30.6 points per game (ppg) over his career, more than any of the others here, and a whopping 33.4 ppg in the playoffs. He was the NBA Finals MVP on all six of his championship teams.

His Rushmore companions have comparably stellar careers. Kareem Abdul-Jabbar has a 6-4 record in the NBA Finals and six MVP awards (NBA record) with the Milwaukee Bucks and Los Angeles Lakers. Bill Russell of the Boston Celtics has more rings than fingers, going 11-1 in the NBA Finals, combined with five MVPs. Magic Johnson of the Lakers went 5-4 in the NBA Finals and racked up three MVPs.

If the criteria is dropped to at least three championships and three MVP awards, only two more players make the cut: LeBron James and Larry Bird.

If the criteria are three or more championships and two MVP awards, there are just two more additions: Tim Duncan of the San Antonio Spurs, who is 5-1 in the NBA Finals and earned two MVPs over a 20-year career, and Stephen Curry of the Golden State Warriors. Curry, with two MVPs, has averaged 23.5 ppg in the regular season and 26.5 ppg in the playoffs, with a 3-2 record in the NBA Finals.

Is Lebron vs. Steph the new Bird vs. Magic?

The Curry-James competition ranks among the best of all time. Such rivalries at this level are rare and intense and need to be recognized for how special they are. In the 1980s, the Magic/Kareem-led Lakers played the Bird-led Celtics three times in the NBA Finals, with the Lakers winning twice. Jordan’s Bulls beat Magic’s Lakers for their first NBA title in 1991.

And in a sometimes-overlooked marquee matchup, Duncan got the better of James in two out of three NBA Finals, his Spurs beating Lebron’s Cavaliers and later splitting two contests with the LeBron-led Heat. All three of Curry’s rings with the Warriors came against Lebron’s Cavaliers.  Lebron got one of his rings by beating Curry and the Warriors.

Many great players are left off this list, but the Hall of Fame is for that.  For example, the late, amazing Kobe Bryant was 5-2 in the NBA Finals, but remarkably was MVP only once.

While cases can be made for so many outstanding athletes as all-time greats, this is a short list based solely on clear criteria — at least three rings and two MVPs. There may of course be other criteria. But it seems hard to argue against any of the eight presented here.