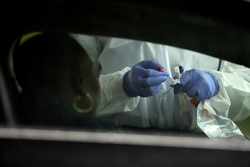 The Prussian military analyst Carl von Clausewitz famously described the confusion and uncertainty around military operations as “the fog of war.”

Over the last several weeks, it often has felt like a similar fog has rolled over daily life for all Americans, as millions of people sit isolated in their homes, worried about the ongoing health crisis and dreading its economic and social impacts on our country.

Information helps clear the fog of war, allowing people to understand the facts, explore the implications, and make appropriate decisions. That’s why our nation’s data-driven businesses have mobilized over the last two months to provide unprecedented news coverage, data analysis, and public education about the many challenges related to the novel coronavirus.

Hundreds of companies, large and small, have stepped forward to use data for the greater good. Some of those efforts include helping local authorities measure compliance with social distancing guidelines, alerting public health officials to new potential virus hotspots through a network of smart thermometers, powering individualized warnings about misinformation and rumors on social networks, and even identifying possible new symptoms of the disease.

Local and national news outlets have redoubled their efforts to educate and inform Americans about the status of the pandemic and the steps they need to take to stay safe, as well as the medical and financial services being provided for support. Working behind masks and by video chat, journalists have risen to the evolving challenge by providing critical around-the-clock information, analysis, and oversight over the actions of our policymakers and elected officials.

Digital media has also provided an important channel for public service advertising, both through national pro bono advertising campaigns with the Ad Council, as well as regional efforts by states and local public health and government entities. Major social media and search platforms have undertaken their own public education campaigns to help their users answer questions and find information related to the disease.

Sadly, while the digital media industry has dedicated itself to massive new efforts around education, outreach, and analysis, the advertising revenue that supports the industry has plummeted. According to a recent survey by the Interactive Advertising Bureau, 82% of media buyers have already adjusted or paused their planned ad spend due to the coronavirus, and 37% said they have paused all advertising until the end of June.

Historically, smaller websites and news publishers have survived on revenue from advertising to their visitors under a consistent and interoperable regulatory framework. Beyond the immediate financial shock resulting from the health crisis, these digital media businesses also face longer-term challenges from new and conflicting state regulations around data and advertising.

Unfortunately, these critical businesses are already threatened by an emerging patchwork of differing state regulations that ignore the national – and global – nature of digital information and services. California has already enacted a sweeping new data privacy law, while dozens of other states are considering their own divergent, and often conflicting, legislative approaches. The chaos ensuing from that regulatory free-for-all could shatter both the technical architecture and the funding model for journalism, digital content, and ad-supported services.

This balkanized approach will also leave consumers with fragmented protections that vary from state to state, based on inconsistent requirements, untested authority, and limited resources. Instead, we should utilize the robust and proven regulatory authority of the Federal Trade Commission, particularly if it is reinforced with greater resources and rulemaking authority by Congress, which is part of the approach proposed by the broad Privacy for America coalition.

A crisis can strip away less important issues and provide fresh perspectives on the things that really matter, and the last several weeks have shown the critical value of data for gathering vital information and supporting the media businesses that inform the public. Data-driven advertising provides the lifeblood of digital journalism and publishing, and fragmented state privacy efforts put that needed funding source at risk.

Drawing from the lessons of this crisis, we hope that policymakers at every level will take a fresh look at the issues around data collection and usage, so we can work together to pass national privacy legislation that allows data to be used for important public health and safety issues, preserves ad-supported news and other digital services, and provides robust consumer protections to ensure their data is used appropriately.