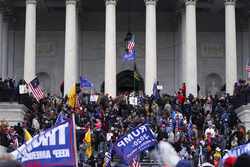 The FBI’s warning of another right-wing march on the Capitol, scheduled for Jan. 17, has been billed by some news reports as a sequel to the attempted insurrection of Jan. 6 or as a protest of calls for President Trump’s impeachment. But in fact, militant groups have been advertising the upcoming march for several weeks.