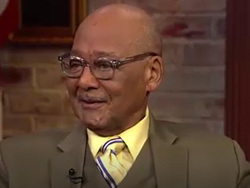 “In the past 50 years, $22 trillion has been spent on poverty programs. Seventy percent goes not to the poor but those who serve poor people,” he said. “So many of those people taking office use this money to create a class of people who are running these cities, and now after 50 years of liberal Democrats running the inner cities, where we have all of these inequities that we have, race is being used as a ruse, as a means of deflecting attention away from critical questions such as why are poor blacks failing in systems run by their own people?”

“It’s more class than it is race … and now race is being used to deflect attention away from the failures of people running those institutions,” he added. “The question is why are black kids failing in school systems run by their own people?”

“When Eric Holder was a U.S. Attorney in Washington, D.C., a lot of young people were shot by the police, but they were black police shooting black kids and not one was prosecuted. But there was no public outcry because as long as illegality or evil wears a black face, then it escapes detection and that’s what’s wrong with looking life through the prism of race.”

“I don’t know what systemic racism is. Maybe someone can explain what that means,” he said.