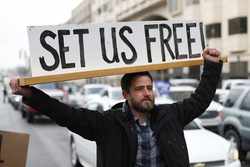 It has now been almost a month since California Gov. Gavin Newsom curtailed significantly the rights to liberty and free assembly for 40 million Californians in the name of public health. Other governors quickly followed. California’s COVID-19 contagion curve has since “flattened” substantially, and it’s time for the governor to lift the lockdown. At stake is not just our material recovery, but our moral sanity and our self-government.

The disease caused by this new coronavirus is serious and dangerous, especially to the elderly and those with at-risk conditions, and they deserve our vigilance and protection. But as President Trump has insisted in recent weeks, we cannot let our response run wildly beyond all balancing of cost and benefit. If we do so, the prospect of a second Great Depression looms ominously.

States have broad “police” powers to protect public health and safety when states of emergency are lawfully invoked. But the ultimate standard of legitimacy for the exercise of such powers is the extent to which they are rational rather than arbitrary, calibrated to protect rather than damage private rights and the public good.

We are told repeatedly by imperious bureaucrats and our self-important media to “trust the scientists.” But any intelligent follower of this crisis knows that prominent scientists disagree on nearly every crucial question about this disease. There is no indisputable “knowledge” to which we are compelled to turn. We instead find ourselves judging between competing theories of epidemiological modeling (some with wildly different or conflicting assumptions), to say nothing of many, many datasets from diverse populations.

Citizens and statesmen must proceed prudentially, especially in such a crisis, charting the course between the competing dangers of death-by-plague and economic collapse while absorbing and assessing real-time data as we get it. Political judgment must trump (pun intended) “expertise.”

The mortality rate of the disease was initially sold as perhaps 3-5%, which in America would have meant millions dead. But we can’t be sure how many people have contracted the virus worldwide or here, so it might be a bit more lethal than the common flu. As we collect more and more data, this looks increasingly to be the case.

We have a dim view of how the virus is contracted. We are told one could breathe it in by getting too close to one’s neighbors, but this is contradicted by doctors serving on the frontlines of the largest current hotspot in New York and by respected virologists alike.

Lockdowns and social distancing are said to be flattening the contagion curve. But the models the West and America have been relying on have seen a month of revisions downward in lethality and projected hospital overloads — and they all had social distancing built into their estimates in the first place.

Meanwhile, these models and the fear they’re stoking are leading to predictably absurd — and capricious — abuses of power. Michigan Gov. Gretchen Whitmer is the leading contender for the COVID-19 Nurse Ratched award: “All public and private gatherings of any number of people occurring among persons not part of a single household are prohibited.” People with more than one home are prohibited from traveling between them. Michiganders have even been instructed which items they can and can’t buy at retailers. Seeds and plants, which would be useful in the event of a food shortage brought on by mass panic, don’t make the cut. Don’t worry, though, you can still buy weed.

There is even talk of massive voluntary (for now) tracking of everyone’s precise daily movements on an app brought to you by Google and Apple. This in the name of “tracing” infections. Thoughtful and cautious citizens will be forgiven if they don’t trust Google — which ended its artificial intelligence work with the U.S. military while launching an A.I. collaboration with the Chinese Communist Party — to be a good steward of their data. Are we going to let China export a mutated version of its state-surveillance to America along with the virus?

The Declaration of Independence contains the broad outlines of American justice: the duty of citizen and government alike to protect the individual rights to life, liberty, and the pursuit of happiness. The 9th and 10th Amendments emphasize that a broad range of unlisted rights remain in the hands of the states and the people. The federal government is empowered by the 14th Amendment to protect the privileges or immunities of citizenship, including freedom of movement, association, and the right to work, contract, and exchange goods and services in support of one’s family.

The ultimate judge of the government’s stewardship of private rights and the public good in America is the people, who are sovereign. In a crisis like this, they should demand more circumspection and rationality, instead of overcorrection and panic, from their politicians.

There is no precise formula or roadmap to judge correctly in the coming weeks and months. No “expert” can decide the proper balance between safety, liberty, and the pursuit of happiness. The American people have every right — even a duty — to resist the abuse of state power in defense of their God-given natural rights.