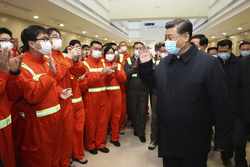 The American people are waking up to the reality that China’s communist government cannot be trusted. The coronavirus pandemic has made this clear in a way that nothing else has for decades. From the moment the virus first emerged, the communist regime in Beijing acted in a way that made a global pandemic possible and then inevitable, plunging America and the world into an unprecedented crisis.

The question now is what will Congress do to hold China accountable for its dangerous and deadly actions?

Every day, our nation learns more about how the Chinese Communist Party endangered American lives and livelihoods. It started when Chinese officials did everything they could to prevent the world from learning about how a strange new sickness was sweeping through the city of Wuhan. A brave Chinese doctor, Li Wenliang, was one of the first to raise the alarm. Instead of listening to him, authorities punished him, claiming he was “spreading rumors.” He later died from the very sickness he tried to warn others about.

Such oppression allowed the coronavirus to spread through China and beyond essentially unchecked. A study conducted by the University of Southampton in the United Kingdom found that if China had acted just three weeks earlier, the number of global cases would have been 95% lower. Sadly for Americans and the world, Beijing put secrecy ahead of the transparency needed to stop the coronavirus in its tracks.

It has since come to light that the Chinese Communist Party was well aware that the coronavirus was serious — and spreading. Even as it downplayed the threat, Beijing quietly did everything it could to stock up on medical equipment. According to Peter Navarro, director of the Office of Trade and Manufacturing Policy, China “went out and vacuumed up all the [personal protective equipment] around the world, 2 billion masks they bought alone.” During January and February, U.S. companies also exported a record amount of medical supplies to China. Had Beijing been honest, these companies would surely have helped build U.S. stockpiles instead.

The result was a shortage of desperately needed medical supplies in America. By March, personal protective equipment was unavailable and back-ordered, right as the coronavirus began tearing through communities. Our medical workers were left holding the bag — literally. Some wore trash bags in lieu of professional-grade protective gear while others relied on relatives and friends to stitch together home-made masks.

Ultimately, China’s secrecy and oppression left America less prepared to prevent the coronavirus from taking off. Tens of thousands of our fellow citizens have now died, and our economy is headed for a severe recession, if not worse.

Much of this suffering can be laid at the feet of the Chinese Communist Party. The American people know this, and they want action.

In recent weeks, former U.N. Ambassador Nikki Haley launched an online petition through Stand for America to “Stop Communist China.” More than 300,000 people have signed it, with thousands more added every day. This groundswell of support reflects the nation’s growing resolve that America must stand up to China. For the sake of Americans’ health, security, and prosperity, it’s time for our leaders in Washington, D.C., to step up.

And some principled lawmakers are doing just that. Rep. Andy Barr has proposed a Joint House Committee to investigate China.  Similarly, Sens. Ron Johnson and Rick Scott have demanded an investigation into China’s influence on the World Health Organization, which blindly repeated Beijing’s claims at early stages of the pandemic. Sen. Lindsey Graham rightly argues that China needs to be investigated, and the United States should sanction those who were responsible for not reporting the pandemic.

Other lawmakers are introducing much-needed legislation. Senators and congressmen, including Mike Gallagher, Chip Roy, and Michael Waltz, have authored bills ensuring that America knows where vital medical supplies are manufactured and encourage companies to produce critical supplies domestically. The coronavirus has made clear that it’s dangerous to rely on Chinese manufacturing in times of crisis. Securing America’s supply chain should be one of Congress’ top priorities, lest our country be held hostage economically to Beijing.

These lawmakers deserve praise for taking up these issues. Their colleagues, on both sides of the aisle, should join them.

Standing up to China isn’t a partisan issue. The coronavirus pandemic has caused Americans of all political stripes to recognize that the Chinese Communist Party is a threat to everything we hold dear. Beijing has not only undermined our economy and jeopardized our security. It bears significant responsibility for the deaths of more than 70,000 American citizens and counting.

That should be all the reason Congress needs to act. The sooner our elected officials hold China’s communist government accountable, the safer and stronger America will be.