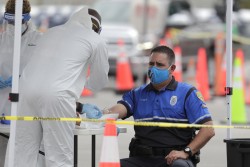 The seeds of the current coronavirus economic contraction were sown during the subprime Panic of 2008.  Back then, short sellers (and those who wanted to blame Wall Street) supported an accounting rule, “mark-to-market,” that caused market participants – and their accompanying liquidity – to flee for the exits.  Instead of fixing that rule, the Federal Reserve instituted quantitative easing while the Treasury invented an alphabet soup of programs that spent hundreds of billions of dollars trying to fill a hole growing bigger by the day.

Those who supported mark-to-market rules at the time said we must “insist on the truth,” and that financial institutions should not be allowed to “mark-to-model.”  In other words, we shouldn’t allow banks to use cash flow models to price their own assets. They should be forced to use market bids, even as markets became illiquid because no one would buy assets in the downward spiral that mark-to-market created.

What’s fascinating now is that so many of those who ridiculed marking-to-model are now magically for it! But this time an illiquid market isn’t the issue — it’s the government leaders who have “marked the economy to pandemic models.” States and municipalities shut down their economies — based on models that predicted 2.2 million deaths in the United States. Hospitals, they said, would be overwhelmed, so we must flatten the curve.  The result? They flattened the economy, risking even more lives in the process, and generated panic that made the markets illiquid!

Not surprisingly, the damage that this new thought process wrought has brought about another surge in government growth. The Fed actions to date make its response in 2008 look small by comparison, and $2.5 trillion in federal spending (with another $1 trillion potentially on the way) blows away TARP, which was just $700 billion. Add in the drastic loss in economic activity that has cut government tax revenues as well, and the financial hole deepens with each passing day.

The subprime mortgage meltdown, on its own, was not enough to take down the economy. What created all the mayhem was the fact that markets became illiquid — frozen, in fact. So if, for example, you held a mortgage-backed security, which contained 1,000 mortgages, 300 of which had defaulted but the remaining 700 hundred were still paying on time, you could not simply mark it down to 70 cents on the dollar. You had to call up trading desks to ask what they would pay. With illiquid markets amplifying the panic, the price came back at 12 cents or 18 cents on the dollar.

Banks, which should have been able to say, “We don’t agree and won’t sell,” ended up having no choice.  Why? Because mark-to-market accounting rules said they had to price that security at market prices and run it through the income statement and balance sheet as if they took the loss, even if the cash flows were still there and the bank had no desire to sell.  This rule bankrupted institutions that should not (and would not!) have been bankrupted.

Now here we are again, like a terrible remake of the movie “Groundhog Day.” Government officials and the press say the shutdowns are saving lives, that marking to the models was necessary, as are trillions in budget deficits and massive money creation. But the pandemic models haven’t proven even close to correct, nor do they include the cost of an economic shutdown. No one actually knew how risky the virus was (though new data suggests it’s a lot less than originally thought), and likewise no one knows the full cost in human suffering that the shutdown is causing. But it doesn’t matter if you don’t agree with the experts; you are forced to mark your life to the model and risk arrest if you don’t.

Millions of small businesses will never reopen. Hospitals, universities, and state and local governments are all facing damage that will take years to overcome. Our children missed graduations, proms, sporting events, and more. The mental damage could last them a lifetime. And when their parents lose their jobs and must go on the government payroll, it will cause even more pain. What is more “essential” than taking care of your children?  But, that doesn’t matter because the government has decided what is essential and non-essential. And this has all been caused by models that most experts now agree were wrong.

There is not enough money in the Treasury to fix all this. Every dime the government spends ultimately comes from the private sector. If we shut the private sector down for just a couple of weeks, let alone months, the cost will take generations to repay. The economic damage from shutting down the economy is expanding exponentially with each passing moment. The only way to stop it is to open up the economy.

But, following the Panic of 2008, many people bought into the myth of government as savior and free market the enemy. Repeated enough, the truth fell victim to narrative. Once mark-to-market accounting was ended, the economy recovered. The mirror image is needed today. We must stop marking to the pandemic model, and trust the private sector. If it weren’t for the private sector, the U.S. would not have anywhere near the testing levels it currently has, nor would we be moving so rapidly toward a vaccine.

While the government, and many experts, take victory laps for slowing down the virus by enforcing social distancing and shutting down businesses, many states that locked down later, or were relatively lax during the shutdown, have done better than states that locked down hard.  Sweden and Japan, which did not lock down their entire economies, are doing better with the virus than Italy, Spain, France, or the U.K.

When the history is written years from now, and we’re not in the middle of panic and spin, we will find that marking to the models did more harm than good. Yes, this virus is deadly, but so are the flu, emphysema, heart disease, and cancer.  Unfortunately, we will now have fewer resources to fight those diseases in the years ahead because we decided that we could eradicate or limit the risk of the coronavirus by spending trillions of dollars we simply didn’t have.