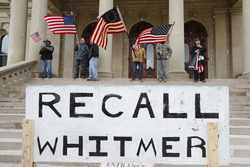 As anti-quarantine protests spread across America, so does the fight for individual liberty.

At a time when government has never been more powerful, Americans from Pennsylvania to the California are right to question its limits. The coronavirus has jeopardized public health and wreaked havoc on the U.S. economy, but it has also exposed the dangers of an ever-encroaching government into once-protected corners of our lives. On a daily basis, Americans are coping with the federal, state, and local government deeming what is “essential” and what isn’t.

As it turns out, our cherished liberties — from religious freedom to free speech — don’t make the cut. Across the county, pastors and parishioners are being fined for daring to go to church.

If there is blame to go around, big-government Democrats deserve the brunt of it. In Michigan, Gov. Gretchen Whitmer faced protests because she imposed one of the strictest stay-at-home orders in the country, preventing Michiganders from visiting their friends and neighbors. She also took economic regulation to another level, limiting the number of people allowed in stores and forcing big-box chains to close entire sections “dedicated to carpeting, flooring, furniture, garden centers, plant nurseries, or paint.”

And she’s not alone. Deborah Frank Feinen, the Democratic mayor of Champaign, Ill., exploited the pandemic to ban the sale of guns and alcohol. Long critical of the Second Amendment, big-government Democrats have finally found an opportunity to undermine it. In Pennsylvania, Gov. Tom Wolf recently described gun stores as “non-essential,” even though the Trump administration said the exact opposite.

Since when is the Second Amendment “non-essential”? Because a Democrat thinks so?

Yes, the coronavirus is serious. And, yes, we need to take social distancing seriously. We are in the midst of a public health crisis, and it is incumbent upon individual Americans to give the COVID-19 pandemic the attention it deserves. We must all make sacrifices for the greater good — from going outside less to staying out of large groups.

But there is a difference between individuals making sacrifices on their own and the government forcing us to sacrifice our essential liberty. A pandemic is no excuse to deny Americans their fundamental rights. It is not a justification to trample on the First Amendment, Second Amendment, or any right guaranteed by the Constitution.

Those rights are as “essential” as the medical professionals on the front lines. As Benjamin Franklin once said, “Those who would give up essential Liberty, to purchase a little temporary Safety, deserve neither Liberty nor Safety.”

As new evidence begins to reveal a more widespread pandemic, but a lower mortality rate, we have new reason to question governmental overreach. A recent German study found that the COVID-19 infection fatality rate is less than 0.4%. In other words, fewer than 0.4% of people infected with the virus end up dying — a significantly lower percentage than the Spanish flu epidemic and only marginally higher than the seasonal flu. Similarly, research from California shows that the U.S. mortality rate is 85 times lower than we originally thought.

But thousands of protesters in Pennsylvania cannot weigh that risk and exercise their constitutional rights? Responsible adults can’t make the decision to go outside — just because a Democratic governor said so?

This is not an excuse to be irresponsible, but neither is it an excuse to exercise anti-American police power. The right to protest is profoundly American, as anti-Trump protesters often tell us. A man lit himself on fire outside the Pentagon to protest the Vietnam War. Thousands of millennials gathered in parks to “occupy Wall Street.”

Hundreds of thousands worldwide joined the 2017 Women’s March. Apparently, the right to protest only matters when it beats up on President Trump.

Politics aside, the First Amendment is a fundamental and protected right. In fact, freedom of speech is fundamental because it is protected in good times and bad. The bad times are precisely when free speech is needed most. We need more speech — and, yes, more protest — to come to a consensus about the pandemic, and how to respond in the weeks to come.

Anything less is government tyranny. Let’s be clear: Freedom of speech is “essential.”

Dan Backer is a veteran campaign counsel, having served more than 100 candidates, PACs, and political organizations. He is founding attorney of political.law, a campaign finance and political law firm in Alexandria, Va.