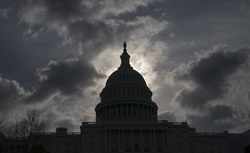 The urban unrest of the mid-to-late 1960s was more intense than the days and nights of protest since George Floyd was murdered by a Minneapolis policeman. More people died then, more buildings were gutted, more businesses were ransacked. But those years had one advantage over the present. America was coming apart at the seams, but it still had seams. The streets were filled with demonstrators raging against the "system," but there was still a system to tear down. Its institutions were basically intact. A few leaders, in and outside government, even exercised some moral authority.