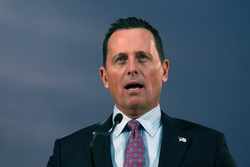 Before he was appointed U.S. ambassador to Germany, Richard Grenell was a foreign policy expert and a media commentator, recognized for his insight and independent analysis. Now that he’s the acting Director of National Intelligence, Grenell is after one thing on behalf of the American people: the truth. In his role as the DNI, Grenell has used his power responsibly, thoughtfully, and constitutionally to find the facts about what happened across the intelligence agencies serving the American people and how they were weaponized for political purposes before and after the 2016 election.

Although Grenell’s appointment earlier this year was always intended to be temporary, he has not taken the job lightly. Just weeks into his new role, Grenell began reforming the Office of the Director of National Intelligence to enhance transparency and accountability while implementing measures to protect our intelligence agencies from future political interference.

In May, Grenell announced even more structural reforms designed to improve ODNI’s efficiency and effectiveness. “[M]ore changes to come…because there have been 4 studies in the last 2 years from other career IC officials asking for reforms,” Grenell tweeted, adding that these reforms “should have been done before I arrived.”

But Grenell’s most important contribution to justice — and truth — has been his decision to declassify the list of former Obama administration officials who “unmasked” the identity of the former National Security Adviser Michael Flynn. Thanks to Grenell’s efforts, Americans now know that the Obama administration abused its power during the 2016 campaign in order to illegally spy on Donald Trump’s associates.

According to a recent statement from Attorney General William Barr, the new evidence shows that the FBI “did not have a basis for a counterintelligence investigation against Flynn at that stage, based on a perfectly legitimate and appropriate call he made as a member of the transition.”

Regrettably, not everyone in Washington appreciates Grenell’s dedication to the truth. The Democrats and their allies in the media are already smearing the DNI for promoting a so-called “conspiracy theory” instead of acknowledging that President Trump was right all along.

“The ‘satchel’ of declassified documents proved true a long-running right-wing conspiracy theory, often referred to as ‘Spygate,’ or ‘Russiagate,’” BuzzFeed News wrote, adding that “there has still yet to be any evidence to prove it.”

Other liberal publications, such as The Atlantic, have portrayed Grenell as “a loyalist with no intelligence experience” who “immediately set about confirming the wisdom behind Trump’s choice” soon after his appointment earlier this year.

Notably, the Democrats were complaining about Grenell even before he began exposing Obama’s illegal spying operation. In early April, House Intelligence Committee Chairman Adam Schiff blasted Grenell for spearheading reforms of his own department, complaining that Democrat lawmakers — many of whom have gone to great lengths to hide the truth about their own party’s criminal use of the federal government as a political weapon from the American people — were not involved in the process.

“I am writing to express my concern that you are pursuing organizational and personnel changes at the Office of the Director of National Intelligence (ODNI) without consulting and seeking authorization from Congress,” Schiff said at the time.

The California congressman has repeatedly lied about Russia collusion. Richard Grenell will be portrayed by Schiff’s accomplices on the left and in the media as a partisan hatchet man, but the American people know better. Sadly, such attacks are only destined to intensify as Grenell continues to uncover the truth and reform the intelligence community.

This won’t stop Richard Grenell from pursuing the truth. The American people deserve nothing less.

Gina Loudon, Ph.D. (@RealDrGina) is a best-selling author, columnist, and frequent news commentator. She is the national co-chair of Women for Trump and is on the Donald J. Trump for President Media Advisory Board.