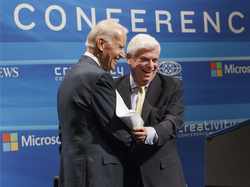 Most nights, he was on the train. A young senator but a dutiful father, Joe Biden would make the commute from Washington, D.C. back to Delaware, taking the Amtrak just to be home in time to tuck his boys into bed. After dark, Sen. Chris Dodd was, allegedly and occasionally, up to something much different.

It was the 1980s, and Dodd was one of the boys. He liked women. He also liked whiskey. On a couple of well-documented but unfortunate occasions, the Connecticut Democrat paired them together. The activities of that good old boy are now cast in the harsh new light of the #MeToo era. Biden has named Dodd to help steer his selection committee for a vice president, raising the question of whether one former senator should answer for his unwanted sexual behavior during those years and whether another, the former vice president, made a poor choice in selecting him – especially as past sexual assault allegations now confront Biden in his White House bid.

Ahead of an interview on MSNBC’s “Morning Joe,” Biden released a statement addressing those charges. “They aren’t true,” he wrote. “This never happened.”

The former staffer, Tara Reade alleges that she filed a complaint with Biden’s office at the time. And while the papers of the former vice president are now sealed and warehoused at the University of Delaware, he insists that those records do not contain personnel files.  If a record exists, Biden insisted it would be in the National Archives, and he told interviewer Mika Brzezinski he’s asked the secretary of the Senate to work with the archives to “identify any record of the complaint she alleges.”

The saga over what Biden did and didn’t do will likely continue until November. The conduct of his newest deputy, a former colleague, is well-recorded in the press.

Dodd has a prestigious resume. He was the chairman of the Senate Finance Committee during the financial crisis. He helped craft Obamacare. He served in Congress for more than three decades. Dodd also had an after-hours reputation. He was considered a playboy at the time, and his less than genteel exploits, helped along by the late Sen. Ted Kennedy, led to an infamous neologism. It’s called “a waitress sandwich.”

The ugly turn of phrase comes courtesy of a profile of Kennedy in Gentlemen’s Quarterly and from the decidedly ungentlemanly behavior by Dodd when he and the Lion of the Senate were on the prowl at a D.C. French restaurant. Again, liquor was flowing. The scene was a private room at La Brasserie. It was 1985. The two senators were acting, as was their habit, like “two guys in a fraternity who have been loosed upon the world,” Roll Call recounted.

The waitress in question declined to comment for the GQ story but said that the account of what happened, which first appeared in the pages of Penthouse, was accurate. Dodd was there with Kennedy and their dates, both blonde and young. It was after midnight. The accompanying women left to use the restroom. The waitress was summoned, and that’s when she was allegedly thrown first onto the table by Kennedy — shattering glass and scattering cutlery – and then onto the lap of Dodd.

Kennedy, five years past a failed presidential bid, jumped “on top and begins rubbing his genital area against hers, supporting his weight on the arms of the chair,” according to GQ.

An eyewitness, Betty Loh, confirmed the incident, telling GQ that the two lawmakers had downed “three or four” cocktails in the first hour of their stay. The waitress screamed as it happened. Dishwashers rushed to the room. The senators allegedly laughed at the scene they caused, then haggled over who would pay the night’s bill.

The alleged assault was unusual, though Dodd and Kennedy, GQ reported, had a habit of wining and dining young dates, making certain “to get their girls very, very drunk.”

There was another infamous moment, this one with a famous movie star. Carrie Fisher had left rehab for the first time and was set up on a date with Dodd. It was 1985 again and Kennedy was there. She was sober and the dinner was almost over when the liberal icon leaned across the table to ask, in Fisher’s telling, “Do you think you’ll be having sex with Chris at the end of your date?”

Recounting the moment in her autobiography, “Shockaholic,” Fisher noted that the senator from Connecticut was “looking at me with an unusual grin hanging on his very flushed face.”

The senator from Delaware, no doubt, would not have approved of either the alleged proposition or the alleged sexual assault of the waitress. Biden has a standard. He shared it in colorful detail in South Carolina before he turned his primary campaign into a winner. “No man has a right to lay a hand on a woman for any reason other than self-defense,” Biden told a gymnasium full of supporters. “If someone in this room got up, took off all their clothes, and walked out the door, no man has a right to touch her.”

Biden still put Dodd on his selection committee, apparently looking past the allegations and past the associates of his colleagues. Dodd later became a lobbyist for the Motion Pictures Association of America. He ran in the same circles as Harvey Weinstein, the disgraced film producer now serving a 23-year sentence for sexual assault. The two, the senator said in 2012, had been “close friends” for 30 years.

Men have been treating women poorly since Adam. But Biden was an early ally of the #MeToo movement. He has not, however, answered why he would still associate with a man of Chris Dodd’s reputation.

Moe Vela, a Biden campaign surrogate who served as the director of administration for Biden when he was vice president, stressed the importance of context. “I think every one of us that’s a human being deserves the right to be judged on the totality of our being,” Vela told RCP. He wasn’t aware of the specific allegations against Dodd but stressed that “the good far outweighs any questionable action.”

Republicans will point out, however, that Democrats were all too willing to assail a recent Supreme Court nomination over much less evidence when it came to the ill-treatment of women. Moreover, bringing Dodd aboard seems curious timing: Biden is facing his own allegation of sexual assault – one more recent, and more verified, than the one Democrats leveled against Brett Kavanaugh,

Reade, the former Senate staffer, has accused Biden of digitally penetrating her. He continues to deny it. Reporters asked President Trump about the allegation in the Oval Office on Thursday. He said he didn’t know anything about it. He said the former vice president should respond. “It could be false accusations,” the president said. “I know all about false accusations. I’ve been falsely charged numerous times.”

Biden was unequivocal in his on-camera denial Friday morning. Pushed by Brzezinski, he insisted that “the facts of this case do not exist. There are so many inconsistencies in this case. I assure you it did not happen. Period. Period.”

The electorate will soon decide whether they believe him. They will be asked, as they walk into the voting booth six months from now, to judge the “totality of being” of both candidates on the ballot.