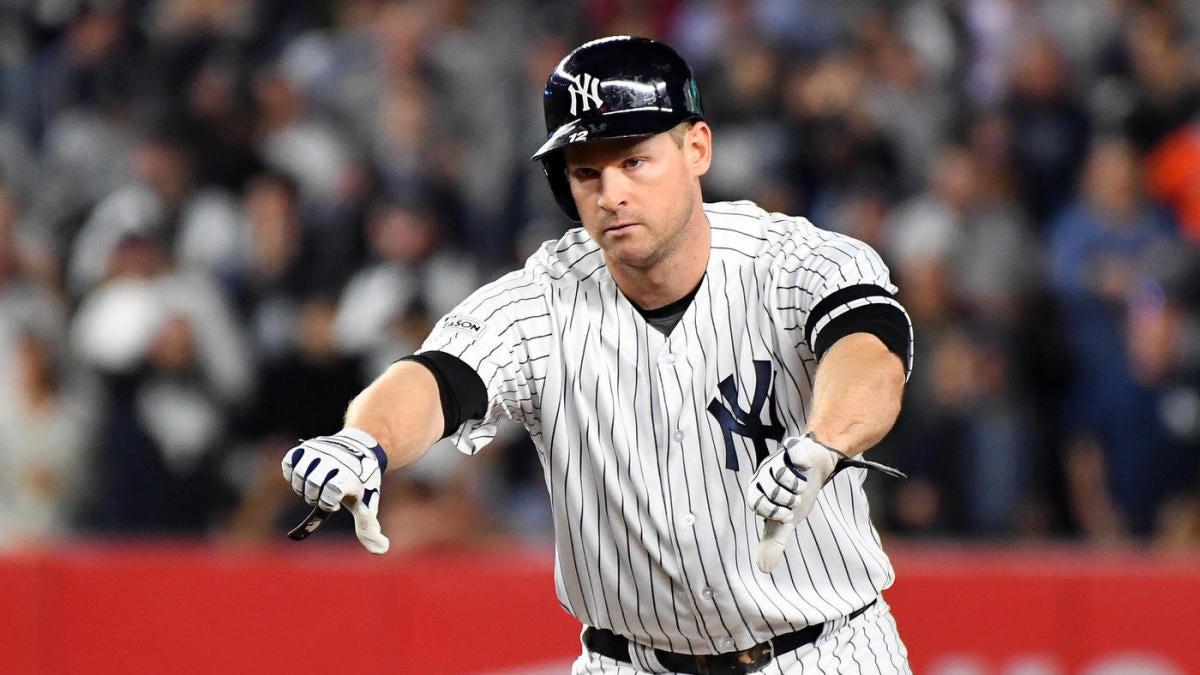 Who will be 2019’s one-season wonders? Those players we look back on in 10 years and say, “Remember him?” Figuring out the answer to that question is nearly impossible, but only nearly.

I looked at six key candidates from 2019 who might fall prey to that fate, and tried to figure out which ones you might actually want to buy into. But one of the key ways to learn how to project the future is to look back into the past for lessons. And that’s exactly what we did on Tuesday’s episode of the Fantasy Baseball Today podcast.

Frank Stampfl, Scott White, Adam Aizer, and I set out to build a lineup of the biggest one-season wonders of the last 20 seasons during the show, debating who counts, who doesn’t, and who to choose. There’s no one obvious definition of a one-season wonder, obviously. Some took it literally, looking for players who only had the one shining moment of Fantasy relevance — think Domonic Brown for a few brilliant months in 2013. Some took a more broad definition, trying to identify the biggest career year outlier performances — what we might have seen from Marcus Semien in 2019, for example.

Ultimately, we agreed more than we didn’t, and we came up with a full lineup. Here are our picks:

I chased this Mesoraco season for years. He had the minor-league track record and pedigree to back it up, but he just never got the opportunity to do so. He started dealing with hip issues in April of 2015 that would ultimately require surgery, and then suffered a torn labrum in his shoulder in April of 2016, limiting him to just 106 plate appearances in those two seasons and effectively ending his career. It’s one of the sadder one-hit wonder seasons in recent history.

The book isn’t written on the story of Aguilar’s career, but it’s not looking good. He showed promise as a part-time player in 2017 and forced his way into an everyday role in 2018 — and the All-Star game — with a massive first half. However, he slumped to a .245/.324/.436 line after the break, a sign of what was to come in a tough 2019. He’ll get an opportunity to turn it around with the Marlins in 2020, but with an ADP outside the top-400 nobody is really buying it.

Admittedly, this is a pretty weak choice — Scott bullied us into picking Spivey. It was a good season — per Razzball.com’s historical rater, he was the No. 6 second baseman in Fantasy that year — and Spivey never had another one near that level again. Still, I would’ve bent the rules to include Bill Mueller, who played 10 games at 2B in his batting title winning 2003, enough to qualify for 2B eligibility.

This was one of the first ones that came to mind for me. Headley was always a better-in-real-life-than-Fantasy guy, because playing in Petco before they moved the fences in was a killer for Fantasy value — the anti-Coors Field. But for that one magical season, it all came together, leading many — well, pretty much everyone — to assume he was destined for Fantasy superstardom upon joining the Yankees in 2014. That … uh … didn’t happen.

Matthews followed this season up with a decent 2007, but nothing ever came close to his level of all-around production this season. Matthews was the No. 24 outfielder in Fantasy in that 2006 season but was never a top-36 option at the position before or after.

Ludwick played from 2002 through 2014, and thanks to Cardinals devil magic, put together exactly one massive season in 2008. He topped his second-best season in runs by 41, home runs by 11, RB by 16, and average by 24 points. Ludwick was useful in other seasons, but this was his only time among the ranks of the elite.

This is a pretty memorable one, as Brown carried plenty of prospect pedigree with him to the majors and seemed to be finally living up to it in 2013. That made the rest of his career even more disappointing, though savvy Fantasy players probably knew not to be fooled by Brown’s “breakout” — 18 of the 27 homers he hit came in just May and June, and he didn’t hav an OPS above .772 in another other month. This was more a two-month wonder, if we’re being honest.

Mueller did end up making the list, and rightfully so, as he won a batting title while establishing career highs in every other category save for steals. His was also an especially memorable one coming on a Red Sox team that fell short of making the World Series in heartbreaking fashion.

Still, I pushed hard for Darin Erstad’s inclusion in either the outfield or utility spot, because while a lot of these guys had fine seasons, Erstad’s was truly elite: He hit .355 with 121 runs, 25 hits, 100 RBI, and 28 steals. His other seasons don’t even come close; he set a career high in runs by 22, homers by six, RBI by 18, steals by four, and average by 56 points. This is, I maintain, the biggest snub on the list, and an unforgivable one on the part of my co-hosts. I will never forgive them.

Loaiza had four other seasons as an above-average pitcher, but only one where he was a truly elite one, finishing second in AL Cy Young voting and even garnering some MVP votes. That season ultimately led the Yankees to acquire Loaiza the following season, where he pitched so poorly in his 13 appearances with the team that his name still lead to curses from Yankees fans.

You’ve gotta be an old head to remember this one, but it was Mays’ only season with more than 171 innings or an ERA below 4.37. We know now that it wasn’t anything special, despite the league-leading ERA+ — he just had the BABIP gods on his side. Still, I can only imagine folks in the early-2000s buying Mays as an ace and being bitten. Different times.

This was my choice, and it was a controversial one, to be sure. But Prior never had another season even close to as good as this one; he had a pretty good rookie season (with an ERA nearly a full run higher in 116.2 innings), and a pretty good 2005 (with an ERA 1.24 runs higher in 166.2 innings), but this was the only time we got to see Prior at full strength, sadly. Maybe the go-to cautionary tale for young pitchers, Prior’s issues were a bit more complicated than popular memory would suggest — he first injured his shoulder in 2003 in a collision while fielding, and then suffered a broken elbow in 2005 on a comebacker. Amazingly, Prior is only two years older than Justin Verlander.

Perez is the bridge between Randy Johnson and Blake Snell in the lineage of lefties with ace potential beset by control problems, and for one brilliant year, he put it all together. He led the majors in K/9 and routinely pitched deep into games, an issue for any pitcher with control issues. He has reinvented himself as a sometimes-brilliant LOOGY, but 2004 (and, to a lesser extent, 2007) was the only time we ever really got to see his full potential.

Another one that is sure to get Yankee fan blood boiling, the Yankees bought into a 29-year-old Wright’s breakthrough with a big contract, a theme for the franchise in the 2000s — Carl Pavano was another name I pushed for inclusion here, sorry. The weird thing about Wright’s 2004 is it mostly looked like it was real — a 3.29 FIP to go with the ERA. You can’t just blame that one on the shortcomings of the pre-sabermetric era.

It was actually harder than you’d think to find relievers for this exercise. Though they often seem to come out of nowhere and return just as quickly, few fall off as quickly as Turnbow did. He was absolutely dominant in 2005, and even started the 2006 season well, saving 23 games through June with a 3.28 ERA. Things fell apart soon after, and he was never trusted with the closer’s job again. In fact, from 2006 on, he had a 6.13 ERA in the majors before retiring in 2009.

Motte was an extremely effective reliever for the Cardinals for a stretch of three years, culimating in his emergence as a shutdown closer in 2012. Tommy John surgery cost Motte the entire 2013 season, unfortunately, and he was never really the same, posting a 4.12 ERA before retiring after the 2017 season.

The biggest debate at pitcher probably revolved around Daisuke Matsuzaka, who got surprisingly little support from my co-hosts. Arguably the most hyped internation signing of all time, Matsuzaka followed up a disappointing rookie season with a top-four showing in Cy Young voting in 2008; he would throw more than 150 innings just once more in his career, posting a 5.10 ERA over parts six seasons from then on.

We also considered that 2004 Pavano season, Alfredo Simon’s 2014, Kyle Freeland‘s 2018, and Aaron Sanchez‘s 2016, and really struggled with how to deal with outlier, ace-level seasons from Ben Sheets and Erik Bedard, who never came close to those heights again, much to the disappointment of Fantasy players. I leaned toward including them, because they showed us the kind of ace upside that is so hard to find, and that Fantasy players will chase for as long as those pitchers are around.

So which sleepers should you snatch in your 2020 draft? And which undervalued first baseman can help you win a championship? Visit SportsLine now to get rankings for every single position, all from the model that called Kenta Maeda’s huge breakout last season, and find out.