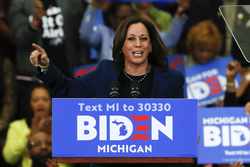 If a broad spectrum of news sites is indicative, Joe Biden’s shortlist for his running mate is now a face-off between California Sen. Kamala Harris and Rep. Val Demings from Orlando, Fla. — two women of color.

Here is the back story.

As confirmation that we live in the most gender-sensitive times, at the March 15 Democratic primary debate, Biden was prompted to announce, “I will pick a woman to be my vice president.” But he did not mention the skin color of his future VP. However, he owes his campaign’s resurrection and presumed nomination to a decisive South Carolina primary victory on Feb. 29 after a late endorsement by the state’s powerful African American leader, Rep. James Clyburn. How powerful is Clyburn, the U.S. House majority whip? Exit polls showed 47% of South Carolina voters indicated his endorsement of Biden was an important factor in their vote.

Then, on March 10, Clyburn told NPR: “I really believe that we’ve reached a point in this country where African American women need to be rewarded for the loyalty that they’ve given to this party.” He added, “So I would really be pushing for an African American female to go on the ticket.”

In late April, Clyburn softened his “demand,” telling NBC News, “I’m among those who feel that it would be great for him to select a woman of color. But that is not a must.”

Subsequently, a combined confluence of events — Biden beholden to Clyburn, the pandemic/economic crisis disproportionately and negatively impacting blacks, Biden’s controversial “you ain’t black” gaffe, racial unrest exploding on a scale not seen since the 1960s — accounts for the media recently settling on a Harris vs. Demings veepstakes face-off.

Perhaps now we can predict Biden’s choice (and possibly a future president) by applying the “Kaine criteria.” This is the model I used in April 2016 to forecast that Hillary Clinton would select Virginia Sen. Tim Kaine as her running mate, months before her July 22 announcement. Let’s compare how Harris and Demings stack up.

Viewed through a 2020 lens, this first criteria seems irrelevant. Biden is not looking for a safe choice. Safe is so 2016. Rallying unenthusiastic voters and pleasing a highly influential congressman trumps “safe.” Nonetheless, Biden — turning age 78 in November, having suffered two life-threatening brain aneurysms in 1988, and plagued by inartful or confused statements — might discover too late that ignoring “safe” is political lunacy.

But these days safe is relative and undefined. Both women are elected leaders and “qualified” to be president since, after the 2016 election, traditional qualifications for the nation’s highest office were declared null and void. More important is whether voters think the VP nominee is “ready” to serve on day one. (Google: Sarah Palin 2008 for how this issue can blow up a campaign.)

Advantage: Tie for the safest choice.

Currently, Kamala Harris’ résumé is topped by her 2016 U.S. Senate election from the nation’s most populous state. To her credit, two years from completing her first term, Harris has valuable presidential campaign experience from her own failed attempt, which translated into national exposure (both good and bad).

She rose to media prominence in 2017 after her aggressive questioning of Republican officials during Senate hearings. Then, during a primary debate last June, Harris famously and roughly sparred with Biden over his record of school busing.

So let’s turn to Val Demings, who was elected to Congress in 2016. In January, she catapulted onto the national scene when House Speaker Pelosi selected her to serve as an impeachment manager in Trump’s Senate trial.

Prior to serving in Congress, Demings spent four years as chief of the Orlando Police Department. Today, her career resembles last week’s SpaceX rocket launch in terms of continuous positive media coverage. If Demings is Biden’s choice, start the countdown clock for Trump to try to alter her trajectory.

For Demings, just appearing on Biden’s shortlist is a win-win. If not selected, in 2022 she will be well positioned to run against Florida Sen. Marco Rubio or challenge Gov. Ron DeSantis, both up for reelection. (Unless she joins Biden’s ticket, wins, and becomes VP. But even a national loss makes her a hot property for leaderless Florida Democrats.)

3. “His geographic and personal story has party-base and general appeal.”

In 2016, Virginia was still swinging “purple” with 13 electoral votes targeted by Hillary Clinton. Kaine, popular in his home state, spoke Spanish and had Midwestern blue-collar roots to boot.

Today, regardless of whether Harris joins Biden’s ticket, California’s 55 electoral votes are safely in the blue bag. Any additional popular votes she brings are like wasted calories. Yet, as the daughter of a Jamaican father and mother from India, Harris could help Biden increase voter margins in several battleground states with voters who “look” like her. But does her “nasty” attack-persona repel white Democrats and independent male voters?

On the other side of the nation is Demings from Florida, with 29 electoral votes that Trump won in 2016 by a 1.2-percentage-point margin. Biden winning Florida could be game over for Trump since, currently, three “blue wall” states with a combined 46 electoral votes look shaky for the president.

Moreover, when Demings was named an impeachment manager in mid-January, the Palm Beach Post reported an emotional tweet of hers from December:

“I am a descendant of slaves, who knew that they would not make it, but dreamed and prayed that one day I would make it. So despite America’s complicated history, my faith is in the Constitution. I’ve enforced the laws, and now I write the laws. Nobody is above the law.”

After Harris and Biden’s “little dust-up” in the June 2019 debate, Harris endorsed and boarded the Biden train on March 8, five days after his Super Tuesday wins. She appears “loyal” for now, or is that just VP shortlist expediency?

Demings had already endorsed Biden March 5 on CNN’s “New Day.” As reported: “Demings did not rule out being Biden’s running mate if she was asked and said she was ‘humbled’ that her name has been raised as a potential add to the Democratic ticket.”

In my 2016 assessment, I quoted Clinton advisers who warned that Hillary’s running mate “must accept and appreciate” her husband offering “expertise and guidance.”

First, both Harris and Demings are well suited to handle “the Donald Trump problem,” having come from tough law enforcement backgrounds. Therefore, expect that Biden will unleash his running mate as an attack dog while he appears more “presidential.”

But when Trump attacks these women of color, he will need to tread lightly due to heightened racial and gender sensitivities, or he’ll likely suffer further vote loss among suburban women.

Second, if elected (and as a former VP) Biden will be prone to offer “expertise and guidance” that both Harris and Demings must navigate. Consequentially, if Biden selects Harris, he might require a “food taster” since the senator appears more power hungry with her own agenda and less likely to accept her president’s “expertise and guidance.”

Lastly, what about the most famous VP selection criteria adage of “Do no harm”? Between Demings and Harris, the senator’s sharp tongue might cause some “Twitter storms” on the campaign trail.

Although Demings’ potential to help Biden carry Florida’s key electoral votes will be very, very tempting, she is still a political neophyte and untested on the national stage. Through the “buzz” of daily media exposure, voters are quickly getting to know her, and Demings could still emerge as Biden’s choice.

However, Harris on the ticket carries more weight with Biden, who spent nearly four decades in that esteemed body.

But most important, either choice will satisfy Rep. James Clyburn.

Myra Adams is a media producer and writer with numerous national credits. She served on the McCain Ad Council during the GOP nominee’s 2008 campaign and on the 2004 Bush campaign creative team. She can be reached at MyraAdams01@gmail.com or @MyraKAdams on Twitter.