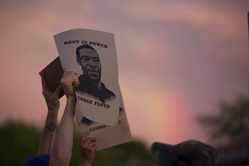 Those are the haunting words of George Floyd, an African American man who begged for his life while handcuffed and pinned to the ground by a white police officer. Bystanders pleaded for relief. Instead the police officer’s hand went in the pocket and his leg dropped more.

“They executed my brother in broad daylight,” Philonise Floyd told CNN on Thursday morning, breaking down in tears. “I am just tired of seeing black people dying.”

The racism taking away Mr. Floyd’s breath is in the air we breathe. If we don’t reckon with it, the cycle of bigotry and death will continue.

This image of a white police officer’s knee pressing down on a black man’s neck painfully symbolized the story of American racism. From the brutalities of slavery to oppressive sharecropping to Jim Crow laws to discriminatory housing policies to mass incarceration, the white knee has long pressed on the black neck, keeping him down, not allowing him air. If we choose the 1619 arrival of “20 and odd” black slaves on the Virginia shore as the beginning of black oppression in America (though its precedents reach back to Columbus) and 1964’s Civil Rights Act as the final relief of those legal injustices, then a mere 16% of the history of blacks in America comes anywhere close to the “self-evident” truth claim that all men are created equal.

I was not alive in 1964. I was born in 1978. I’ve never owned slaves. I’ve never knowingly leveraged any white privilege to take from blacks. I’ve never used the n-word. My knee has never held a black man down. So I understand the exasperation of other white or non-African-American people who look at protests, at BlackLivesMatter hashtags, at demands for justice and wonder, “What am I supposed to do?”

There may be solid answers to that question. But in this moment each of us can do at least one thing: pay attention to our breathing.

Over the last few years I have, to the annoyance of my family, taken historical deep dives into the Watergate scandal and the Vietnam War. My regurgitation of major characters and plot twists has become so exhausting to those I love that the mere mention of the words “Watergate” or “Vietnam” initiates eyes rolling by all but me.

After a while I started wondering why these particular events have drawn me in so vigorously. Why not the Civil War or World War II? What is it about the 1970s? Eventually the answer came to me: I wanted to know what air I was breathing when I came into this world.

One of the newer frontiers of psychology is the study of transgenerational trauma — the idea that trauma and its effects can be passed from one generation to another. I’m a pastor, not a psychologist. But I know a Jewish friend who battles concentration camp nightmares even though she was born 30 years after the Holocaust. I know that my African American congregants feel American racial injustice in different and deeper ways than my immigrant African members. I have seen the deep creases around the eyes of an Ojibwe chief as he told me that his people’s problem was not ultimately alcohol but an inability to grieve what was taken from them long ago.

They were breathing air that had been in their family, tribe, or community for generations. And if that was the air they breathed, what about those on the other side of those injustices, the ones who looked like me?

When I was a boy, my brother and I flew down to Savannah, Ga., every year to spend a week with our grandparents. These were glorious times, filled with fried okra from the garden, excursions in nature, and the climactic trip to Showbiz Pizza.

One year when my grandfather picked us up from the airport, the young black lady collecting his parking fee took too long to make change for his liking. With his left hand that dangled out the open window of his Cadillac, he snapped and held out an impatient palm. She sat tall as if an electric shock had gone up her spine. “I ain’t your servant, I ain’t your slave, and I certainly ain’t your friend!”

Time stood still. My brother and I — around 8 and 11 years old, respectively — looked at each other with wide eyes. We were breathing in something as thick as the oppressively humid Savannah air. I don’t feel qualified to adjudicate whether my grandfather was a racist. I never heard him use racial slurs or disparage blacks. But something was in the air. Racial discomfort, at the very least. Assumptions. History. But it was all unspoken, unnamed, unprocessed. The prior conversation resumed as we drove away with change in hand.

I wonder what air my grandfather breathed. At 14, was he too busy trying to help his family of 11 survive the Depression with his job at the cotton mill to formulate opinions about Jim Crow laws? What about his grandfather? How did he respond to the brief period of black prosperity and prominence during Reconstruction? And what of his grandfather? Did he, in the antebellum South, breathe in the air of phrenology, the “scientific proof” through skull shape and indentations that Africans were naturally subservient and thus fulfilling their God-given role of slave labor?

What I’m describing isn’t white guilt; it’s an acknowledgement that no one is born into a vacuum. We are born breathing the air that our ancestors exhaled. So when the question “What am I supposed to do?” arises in my mind and heart, I begin by reckoning with the air I breathe.

There are particulates of racism in there; there have to be. I come from generations of assumptions and stereotypes about people who don’t look like us, people who lived outside our orbit, who were on the receiving end of bigotry. I have been exposed to all sorts of viruses — suspicious glances, locking-the-door-when-a-black-man-walks-by, and “Why don’t they…?” questions that rarely included a genuinely desire to find out. Instead of fussing over the question “Am I a racist?” (as if a binary answer is possible) I must isolate, name, and grieve what I have breathed, lest I pass it on to others.

As my wife and I raise our biracial daughter, our twin teenaged black sons, and our towheaded preschooler, we will name prejudice, our own and that of others. We’ll speak honestly about our white family’s past and hopefully about our transracial family’s future. As I pastor a multi-ethnic church, I will move us toward, not away from, the uncomfortable crevices between our cultural experiences and find ways to bridge the gap. And I will not be afraid to challenge assumptions in order to nudge us along the road toward greater justice and harmony.

None of this can put breath back in George Floyd’s lungs. But if I can play a small role in transforming my family, my church, and my neighborhood into agents of reconciliation and advocates for justice, then perhaps the black necks of my sons, my congregants, and my neighbors will remain safe from another white knee.