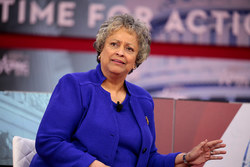 As pro-life women leaders we have particular revulsion at the murder of George Floyd, a precious human life created in the image of God, by a white policeman in Minneapolis. We are also revolted by the senseless violence of criminals using this tragedy for their own selfish purposes.

Our nation is shaken to its core. In this moment, as the nation looks for leadership, we are grateful for the transparency and vulnerability shown by our friend Kay Coles James, the first African American (and the first woman) to lead the historic Heritage Foundation. We noted that she received criticism recently from Fox News host Tucker Carlson, saying that she “wrote a long screed denouncing America as an irredeemably racist nation” in her response to Floyd’s death.

We agree with his righteous anger against lawlessness. However, we feel compelled to say this statement is contrary to the woman and leader we know.

Indeed, Kay deeply believes in American exceptionalism and opposes the rewriting of our nation’s history. In addition, having experienced racism in its malignity herself, she has become a preeminent conservative spokeswoman who can address it while applying its antidote — constitutional principles.

As a little girl, from her screened porch she listened to civil rights leaders plan in her living room. The fight for human dignity was in the air and flowed in her bloodstream early on.

This formed her into an ideal advocate for those on the economic margins, the unborn child, all those disenfranchised who were promised to and provided for in our founding documents. It’s no coincidence that, before she became a giant in the conservative moment, she got her formation in pro-life activism.

In her recent op-ed, Kay wrote thoughtfully about the promise of equality in the Declaration of Independence, and she emphasized how America’s founding principles contain the tools of redemption necessary for every generation to right what is wrong in order to form a more perfect union, and how we must look to those principles to expand human flourishing to all Americans.

The entire history of America is the story of this expansion, from the emancipation of slaves to the enfranchisement of women in the 19th Amendment (which turns 100 this year) and – soon – the restoration of the right to life for the unborn. Every successful human rights movement in our history, rooted in the deep soil of the American founding, has asserted that authentic rights cannot be built on the broken bodies and rights of others.

Kay’s advocacy flows from her expansive understanding of human dignity, which she feels in her bones. She sincerely walks the walk. Think of the countless opportunities she has had to get off the road less taken, if the spirit of the American founding were not alive in her.

This is evident in her mentorship of young African American leaders through the Gloucester Institute, which she founded. How fitting that the centerpiece of this program is Sunday dinner. Where people gather around the dinner table, their heart is present. That is the starting place from which all public policy extends. Kay has always paid special attention to those who are overlooked. It would be impossible to fully assess the impact she has made through the many people she has quietly mentored over the years.

We don’t see Tucker’s legitimate outrage and Kay’s faith in our founding principles as being at odds. Theirs are both voices of intellectual force that will help our country overcome this low moment.

Kay is the model leader and coalition-builder to stand at the helm of one of America’s most influential engines of conservative thought. There is no one more trustworthy to hold steady that great rudder. At a time like this, she is uniquely poised to speak and lead.

Kay recently celebrated her 71st birthday. Consider all that she has experienced in her lifetime: the civil rights movement, the Cold War, the Reagan revolution and the fall of the Soviet Union, Roe v. Wade and the fight to recognize the unborn as equal members of our human family. She understands what racism is. She also knows what empowerment is and isn’t, making her an ideal advocate for it culturally and economically. She has something important to say to and about America in this turbulent moment, and we would all be wise to welcome her sharing of her own experience.  The hardest parts of her life story and her Christian faith are the very things that solidify her belief in American opportunity, exceptionalism and her tireless advocacy for conservative policies and values.

Marjorie Dannenfelser is president of the national pro-life group Susan B. Anthony List.

Penny Nance is president and CEO of Concerned Women for America.