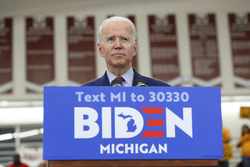 How is Joe Biden’s general election campaign going? On the one hand, he’s leading in all national polls (except FOX News, where he’s tied with Trump), and nearly all swing-state polls, taken in the last month. His incumbent opponent is presiding over a mismanaged pandemic that’s causing mass death and economic calamity. And all of the Democratic Party’s major figures have united to endorse his candidacy.

On the other hand, Biden’s media presence has been severely diminished by being confined to a home studio, a medium that is not a natural venue for his political talents. He’s still suffering sharp criticism from some Bernie Sanders supporters, which is being amplified by Trump and his supporters. And a former employee is claiming he sexual assaulted her 27 years ago.

Whether you think he’s winning or losing probably depends on how much stock you put in his poll numbers. “Hillary was leading in the polls, too” is a common refrain from Donald Trump backers, Biden’s left-wing critics, and psychologically damaged Democrats. It’s reasonable to believe that Trump is chronically undervalued in polls, and that Biden’s lead in swing states isn’t wide enough to withstand a timely surge from Trump’s base when it counts.

But Hillary’s 2016 numbers were softer and more erratic. In the RealClearPolitics’ national trial heat average, from September 2015 to November 2016, Clinton’s level of support ranged from 43% to 50%. When she dipped, her lead over Trump would be a mere one point, if it existed at all.

Going back to September 2019 in the RealClearPolitics average, Biden has yet to experience such a dip. His range of support is between 47% and 53%. His smallest lead over Trump has been four points – that was in December and January, when the impeachment process was in high gear and Biden was bombarded with questions about his son’s role with the Ukrainian gas company, Burisma. Presently, Biden’s average lead is at six percentage points.

Clinton was dogged through the 2016 campaign with questions about her private server and emails, with eager encouragement from Trump. Might Biden similarly be dragged down as his critics try to tar him with the Burisma accusations, Tara Reade’s sexual assault accusations, and the circulation of video clips designed to make it appear that Biden is suffering cognitive decline?

Perhaps, but Biden’s current political position suggests he’s more Teflon-coated than many have assumed. He has already weathered the flurry of Burisma accusations. To some Democratic voters in the run-up to Iowa and New Hampshire, Biden’s blustery defensiveness made him look like damaged goods. But however awkward certain exchanges have been, Biden’s refusal to wilt helped him withstand those attacks to claim the Democratic nomination and hold the general election lead. Even the incendiary Reade accusations, so far, have failed to derail Biden. Last week, when major news organizations such as the New York Times finally began to report on the charges, Biden attracted more coverage from his string of high-profile endorsements by Barack Obama, Bernie Sanders and Elizabeth Warren.

The Reade claims remain below-the-fold, after mainstream media coverage included weaknesses in her story, and several subsequent commentaries from progressive women have expressed hesitation in taking her accusations at face value. Even some who have suggested the allegations are believable, such as Rep. Alexandria Ocasio-Cortez and GEN columnist Jessica Valenti, say they will nonetheless vote for Biden, even if it is unenthusiastically and without official endorsement. In effect, the message being sent to progressive voters is: whether or not you or believe Reade, vote for Biden, because the alternative is unbearable.

Such reaction in all likelihood isn’t an accident. Surely the Biden campaign has been communicating to members of the progressive punditocracy and the Democratic Party, and whatever has been said, appears to have convinced them that the charges won’t hold up and drag Biden down. If there’s anything Democrats and progressives know how to do, it’s publicly panic, yet in this case, they haven’t. They’ve rallied around Biden and limited the oxygen for the Reade story.

Democrats have a long history of watching their presidential candidates succumb to, or survive, scandal coverage. Michael Dukakis in 1988 couldn’t defuse the Willie Horton controversy, and in 2004 John Kerry struggled to dispense with old rumors that his war medals were undeserved. But Bill Clinton in 1992 powered through charges of marital infidelity and draft-dodging, and Barack Obama in 2008 overcame the anti-American sermons of his Chicago preacher.

Joe Biden was vice president when Hillary Clinton floundered while trying to explain away her private email system. With an assist from James Comey, the poll data revealed how the issue weighed her down. There are lessons here and they haven’t been lost on the Biden campaign. While past is not necessarily prologue, we have seen Biden and his campaign combat and contain multiple threats to his credibility and reputation. Just as Trump’s base remains loyal in the face of multiple controversies, including an impeachment and a pandemic, Biden’s base, while perhaps less intense, is similarly durable.

And the polls keep telling us that Biden’s base is a little bit bigger.

Bill Scher is a contributing editor to Politico Magazine, co-host of the Bloggingheads.tv show “The DMZ,” and host of the podcast “New Books in Politics.” He can be reached at contact@liberaloasis.com or follow him on Twitter @BillScher.