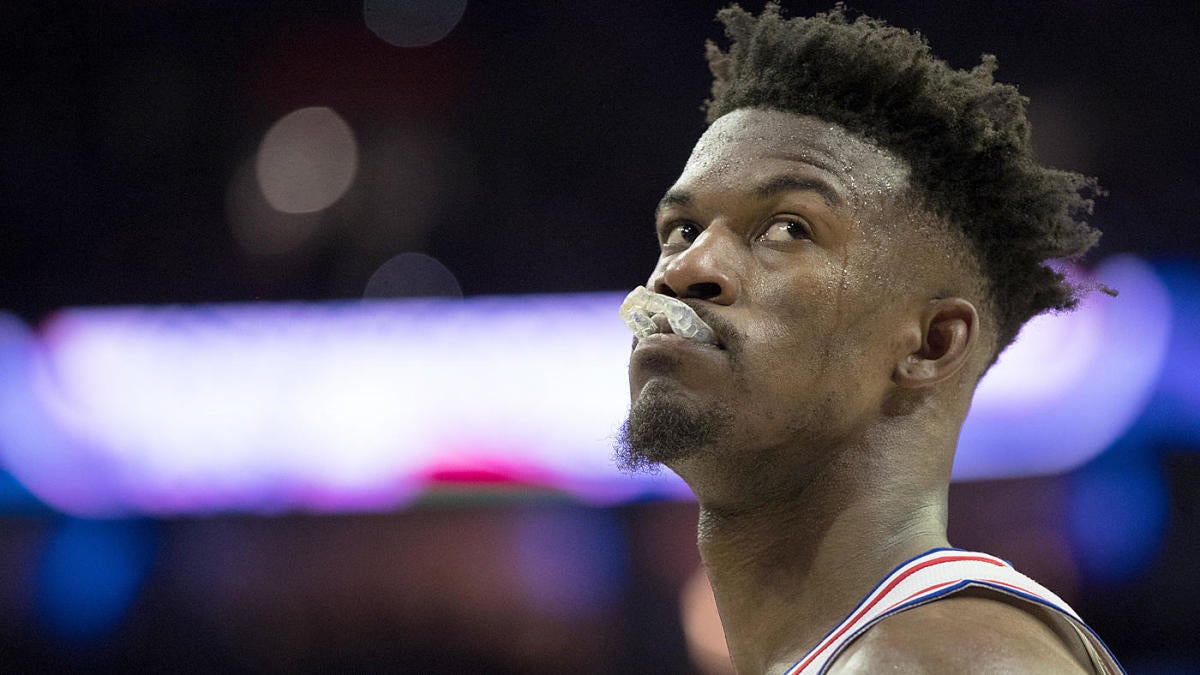 Last May, the Philadelphia 76ers were a couple of unfriendly bounces away from a potential Eastern Conference finals appearance. Unfortunately for the Sixers, the ball didn’t bounce their way. Instead it was a Kawhi Leonard jump shot falling in and the Toronto Raptors moving on to the Eastern Conference Finals, and ultimately winning the NBA title.

That game would ultimately prove to be Jimmy Butler’s last with the Sixers. In the offseason, Philadelphia dealt him to Miami where he signed a four-year, $142M deal with the Heat. Although he’s on a different team, Leonard’s shot still stings, Butler told WNBA star Sue Bird and soccer star Megan Rapinoe during a recent session on Instagram Live. Bird asked him what he was thinking as Leonard’s shot dropped through the net, and he provided a brief — and explicit — response.

“F—,” Butler said. “The crazy part is, when it hit the rim I was underneath it, and I was like ‘this shit is going in.'”

Butler previously discussed his reaction to Leonard’s shot during an appearance on JJ Redick’s podcast in March, and said that at the time, he had a feeling that he wouldn’t be back with the Sixers.

“A lot was going through my head,” Butler said when asked by Redick what he was thinking about as the shot went in. “I already knew how I believe it would have worked out if that shot wouldn’t have went in, and we go into overtime, and we win. The shot goes in, we go back to the locker room. I’m in awe a little bit, and then after everything settles down, the first thing to comes to my mind, legit, is ‘will I be back here?’ Will I have an opportunity to do this again with these guys?’ To tell you the truth, I had a feeling it would be a no.”

While things didn’t quite work out for Butler in Philadelphia, he has moved on to Miami, where he seems to be a perfect fit with the Heat organization, and the four-time All-Star has no complaints whatsoever.

“I’m hella happy [in Miami],” Butler said to Bird and Rapinoe. “… This organization is special … There isn’t a better place to be, for me. Miami’s it.”

Butler is so happy in Miami, in fact, that he’s already gone as far as saying that he would like to play the rest of his career for the franchise – something you never heard him say during his tenures in Minnesota and Philadelphia.

“This is where I’m going to be for hopefully the rest of my career,” Butler said back in October. “I think I fit here. The way that they work, the attitude that they go about everything, it’s me in a nutshell.”

While Butler has said and done all the right things since signing with the Heat, there’s one obvious lingering question: Will it last? In Chicago, things were fine for only so long. Same in Minnesota. There weren’t even overt signs of issues in Philadelphia, and the team was winning, but that didn’t work out either. So, it is fair to wonder how Butler will react when the honeymoon phase with the Heat comes to an end and the team gets mired in a long losing streak, or flames out in the first round of a postseason. For now, though, Butler appears to be thriving in Miami, even if he’s still a bit bothered by the way that his stint with the Sixers came to an end.