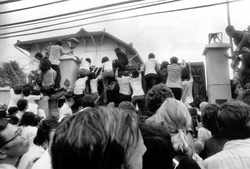 April 30 is an eventful date in the life of our nation. It was April 30 in 1789 when George Washington took the inaugural oath as the first president of this — or any other — country. “In our progress toward political happiness my station is new,” Washington wrote to a friend, “and, if I may use the expression, I walk on untrodden ground.”

So does each of us, in our own way. Presidents, yes, but soldiers and civilians, too, as we are finding out anew this April. Will America come out of this latest crucible? Yes, and if history is any guide, we will be stronger and better for it. That doesn’t mean there won’t be pain. There will be casualties, too. It was on April 30, 1973 that Richard Nixon delivered his first national speech on the scandal beginning to envelop his presidency. He hoped it would help put Watergate behind him. Instead, he was gone from the White House by the summer of 1974.

Less than a year later, on April 30, 1975, America was dealt another body blow, this one in the form of an ignoble retreat from Vietnam. I’ve written about the evacuation of Saigon before, but the current context of lives places it in a different light.

A discordant tune blared over the radio in Saigon on April 30, 1975 — discordant for the time of year, anyway. The song was “White Christmas,” and it wasn’t playing as a way of heralding movie night for the GIs. It was the signal to evacuate the city.

Although the handful of U.S. Marines, embassy personnel, and American journalists still stationed in South Vietnam knew the end of the war was imminent, few seemed to realize just how imminent. Saigon’s airport had come under attack two days earlier, and at the White House, President Gerald R. Ford had reluctantly given the order to implement an operation code-named Frequent Wind. It was a poor choice of words for this maneuver. This wasn’t a “frequent” wind, it was a rare wind — a gale, really — with a ferocity no living American had never seen: the retreat of U.S. military forces from the field of battle.

“The ending was very dramatic, as everybody knows,” Time correspondent Roy Rowan recalled in an interview with his old magazine four decades later. “I remember waking up at three in the morning and hearing ‘White Christmas’ and wondering what the hell it was going to be like trying to walk out of this place.”

The evacuation was frantic. The photographs of desperate Vietnamese who had been loyal to the United States trying to claw their way onto U.S. military helicopters are still haunting.

George Washington had helped forge a nation by leading a ragtag army of citizen-soldiers against battle-tested regulars marching under the flag of the British Empire. Two centuries later, indigenous forces had done the same thing to Americans. Dwight Eisenhower, who had followed in the footsteps of George Washington as a general-turned-president, had mostly kept us out of Vietnam. His successors, junior officers in World War II, had not been as wise.

President Ford inherited the quagmire in Indochina and although opinion was divided in the Pentagon then (as it remains today) over whether the Vietnam War was winnable “on the ground,” that wasn’t the only relevant question. In democracies, wars are not only fought on battlefields. They are also waged in the battleground of public opinion, and by the spring of 1975 the American people no longer supported the effort, meaning that it was politically unsustainable.

Ronald Reagan would later call Vietnam “a noble cause,” which was not so much political pandering or even a dog whistle as it was a longed-for Nightingale’s Song to many combat veterans of that conflict. Journalists who had covered the Vietnam War wrestled with this question, too. Reporters such as Donald Kirk, who returned to Saigon (now Ho Chi Minh City) 40 years later found that the Vietnamese people, while no longer bitter at the United States, still lacked basic freedoms that Americans accept as their birthright. Vietnam was probably a mistake, it was certainly a U.S. defeat, and it may have been a waste of lives and treasure. But it wasn’t fought over nothing.

Did we learn anything from it? Critics of the seemingly endless wars in Iraq and Afghanistan wonder about that. And what are the lessons from Vietnam that inform our behavior as citizens in the current crisis? I’d suggest two.

First, it turns out elections are indeed important, just not necessarily in the way our two major political parties claim them to be. Voters are encouraged to vote on “the issues,” but the truth of the matter is that they can’t know what those issues will be in the future because we can’t foresee the trials and tribulations that wait around history’s corner. What is most important is to have wise and experienced men and women in positions of authority, leaders who instill confidence in the people and who are willing to make difficult decisions for the right reasons.

Here’s another: It’s never a good idea to stifle dissent, whether that silencing is done with M-1 rifles amid the chaos and tear gas at Kent State — or quietly and surreptitiously from the bucolic Silicon Valley campus of a social media company.

Carl M. Cannon is the Washington bureau chief for RealClearPolitics. Reach him on Twitter @CarlCannon.