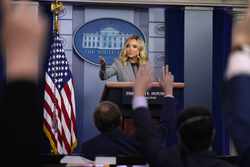 Back in 2016, after the stunning victory of Donald Trump, I daydreamed about working in the White House press office, telling myself that I would be on the front lines of history. It would be the equivalent of the New Frontier, I thought, imagining a phalanx of Trump-inspired conservatives arriving in Washington to support the MAGA revolution just as eager Democrats had flocked to Washington to serve John Kennedy when he reinvigorated the American spirit.

Of course, none of that happened. Instead of being greeted as a conquering hero like JFK, Trump was met with a chorus of snickers and sneers. The FBI’s “insurance policy” kicked in and targeted Trump with whispers and rumors about golden showers and prostitutes and Russian assets. The president’s national security adviser, Michael Flynn, was shooed out of office in a whirlwind of unfounded allegations that damaged not just him but the president he served.

As for the press office, it was Ground Zero for much of the war that the corrupt media has waged against Trump. White House Press Secretary Sean Spicer got matters off to a bad start his first week when InaugurationGate led the news on seemingly every channel and front page: “What did the president know about crowd size estimates and when did he know it?” Instead of glossing over the president’s comments about how his crowd surpassed that of Barack Obama as just so much political blarney, Spicer doubled down and tried to turn the president’s opinion into a fact. Bad idea, but unfortunately one that set the tone for the next 2 ½  years as first Spicer and then Sarah Huckabee Sanders tried the impossible task of channeling the mercurial president.

If reporters wanted to know what President Trump thought, he figured, they should ask him — or just read his tweets. No need for Sean or Sarah to massage his words into some kind of gospel truth. Trump is a born showman, and he uses words to entice and to entertain, not to write a laundry list. But his press office, and most of his chiefs of staff, never understood that. By trying to give reporters the literal truth, they were robbing the president of his greatest gift — the ability to rise above the mundane and to conjure a better world through sheer willpower.

By the time Sanders left the White House in July 2019, I knew I had dodged a bullet by having my name “overlooked” by the Trump transition team. Only a madman would be able to tolerate the badgering, ruthless, unethical tactics of the Washington press corps. My idea of bringing a Montana newspaperman’s work ethic to the swamp was hopelessly naive. What was the point of answering questions when every question was biased, every answer was distorted by reporters, and everyone who supported this president was judged to be a Nazi or a moron?

My epiphany was apparently shared by Trump and his third press secretary, Stephanie Grisham, because during her 10-month tenure in the job, she never held a press conference. Not one. Bravo! As I’ve noted before, the daily press briefing is one of the worst ideas in history. To expect one person at a podium to be able to speak authoritatively not just for the president but for an executive branch encompassing hundreds of thousands of people is not only unfair, it is stupid. The answer to every question asked at the press briefing should be the same: “I’ll get back to you on that.”

Grisham would have been a worthy choice to continue as press secretary through the end of this term or into the next, should there be one. Her unflappability was conjoined with a willingness to let the president speak for himself. Unfortunately, Trump’s new chief of staff, Mark Meadows, wanted to put his own stamp on the press office, because one of the first things he did was ask Grisham to return to her previous job working for the first lady.

The announcement that she would be replaced by Kayleigh McEnany was a surprise. But it would be a mistake to underestimate McEnany. Although she does not have a background as either a journalist or a political operative (typical background for someone in the press sec role) she was a producer on Mike Huckabee’s weekly show on Fox News and later graduated from Harvard Law School in 2016 – the year she emerged as a pro-Trump voice on CNN. I suppose being a Trump supporter at far-left Harvard gave her just the sort of background she will need to successfully fend off the media mob in the James S. Brady Press Briefing Room at the White House.

It didn’t look like she was the least bit fazed by the disdainful acknowledgments of her when holding her first press briefing on May 1. When AP reporter Jill Colvin asked, “Will you pledge to never lie to us?” McEnany dutifully replied that, “I will never lie to you,” but it was a pointless exercise because whenever she speaks on behalf of President Trump, the assumption on the part of the partisan press will be that since Trump is wrong she is wrong, hence lying.

Dozens of news organizations denounced her as a liar just on the basis of that one statement, leading to the usual paradoxes. Rolling Stone, for instance, claimed, “With Kayleigh McEnany, the White House Isn’t Even Pretending the Truth Matters.” Since McEnany claimed that she will always tell the truth, she is either sincerely telling the truth or she is indeed “pretending the truth matters.” It is therefore Rolling Stone that is lying, not McEnany.

There have now been two press conferences held by McEnany, and it is apparent that she is girded to go toe-to-toe with her tormentors. Two of her best responses so far were: “I’m not going to engage in a hypothetical” and “I would refer you back to President Trump.” There is absolutely no reason for a press secretary to speculate about what might have been or could have been or should have been. Nor should she try to put words in the president’s mouth. If someone wants to know what Trump thinks, they have ample opportunities to do so without turning the press secretary into a mind reader.

Her finest moment so far came at the end of her second press conference on May 6 when Reuters White House correspondent Jeff Mason asked her about a comment she had made on Feb. 25 on the Fox Business Channel before she took her current job.

“You made a comment … in which you said President Trump will not allow the coronavirus to come to this country. Given what has happened since then, obviously, would you like to take that back?”

This kind of “gotcha” question is intended for no purpose other than to embarrass or intimidate. But McEnany was having none of it. In a piece of neatly choreographed legerdemain, she turned the question back on Mason and made him look like the troll he obviously wanted to be. Reaching for her briefing book, she first explained the context of her Feb. 25 statement, made well before the virus had taken firm root in the United States, and then went on offense:

“I’ll leave you with those questions and maybe you’ll have answers in a few days,” she taunted as she ended the press conference. It was a classic mic drop, but the media didn’t have the grace to appreciate it. Someone shouted sourly at McEnany as she departed, “You were prepared for that question!”

Damn straight! Mason and the rest of the press corps had better be prepared too from now on, because they may have met their match.

Frank Miele, the retired editor of the Daily Inter Lake in Kalispell Mont., is a columnist for RealClearPolitics. His books — including “The Media Matrix: What If Everything You Know Is Fake?” — are available from his Amazon author page. Visit him at HeartlandDiaryUSA.com to read his daily commentary or follow him on Facebook @HeartlandDiaryUSA or on Twitter @HeartlandDiary.