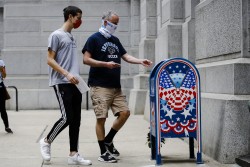 No, we’re not going to have a nationalized vote-by-mail election this fall. You can ignore the hysterical tweets. But yes, many states will be expanding the use of mail-in ballots and Republicans who want their candidates to win are getting on board — with or without President Trump.

While Trump works hard to drive down support for mail-in voting, and polls show he has succeeded in doing so with a chunk of his voters, it appears many GOP election officials are ignoring him and expanding it anyway.

On Tuesday, Pennsylvania held its primary and while the state saw 14 times the amount of requests for absentee ballots than in 2016, Republican officials were alarmed by how many came from Democrats. “Democrats will use the new mail-in ballot to greatly increase their turnout,” the state party warned on its website. “Republicans would be smart to do the same so that we have the advantage.”

Dave Millage, GOP chairman in Scott County, Iowa — a red state — was more blunt when he told The New York Times this week: “The president has his viewpoint and we have ours: We’re trying to win elections.”

That’s not the messaging Trump has pushed and many other leaders have echoed. Republican National Committee Chairwoman Ronna McDaniel said recently: “Democrats want to take away the safeguards that ensure the integrity of the election process” because, she said, they were pushing for “election reforms across the country during a time of crisis.”

Trump has admitted he sees increased turnout as a win for Democrats, and said if Republicans agreed to expanded vote-by-mail “you’d never have a Republican elected in this country again.” In a recent tweet he urged opposition: “Republicans should fight very hard when it comes to statewide mail-in voting. Democrats are clamoring for it. Tremendous potential for voter fraud, and for whatever reason, doesn’t work out well for Republicans.”

Trump’s rhetoric has not only suggested that vote-by-mail is rife with fraud but that the coming elections will be “rigged” by Democrats. Both these claims are false. Twitter’s first disclaimer on a tweet of Trump’s was a fact check on his claim about mail-in ballots. Absentee-ballot systems use signature verification, tracking and auditing to certify ballots. The Heritage Foundation, which tracks election fraud in an online database, reports that of 250 million ballots cast in the last 20 years there were only 204 cases of the fraudulent use of absentee ballots.

“It is inappropriate to sow seeds of doubt about a national election, and to discount the ability of secretaries of state — be they Republicans or Democrats — to provide a safe and secure alternative,” said former Pennsylvania Gov. and Homeland Security Secretary Tom Ridge, a Republican, who is spearheading a bipartisan project, VoteSafe, along with former Michigan Gov. Jennifer Granholm, a Democrat, to expand access to absentee ballots.

Georgia is holding its primary on June 9 with expanded absentee ballots and GOP Secretary of State Brad Raffensperger said in an interview with RCP he is “very excited” that the state has been able “to relieve the pressure of in-person voting.” Voting in Georgia, as across the country, has been challenged by the coronavirus pandemic — many voting locations are no longer open and many volunteers who staff elections are over age 65 and will not be risking infection to man the polls. Stretched staff and longer lines at fewer in-person locations has produced a huge surge in interest in absentee voting. Raffensperger said Georgians will have all options available to them in November — early voting, absentee voting and in-person voting on Election Day. Raffensperger said he is confident about absentee voting, which voters have used for years. “All the guardrails are in place,” he said.

Nebraska’s Republican governor and secretary of state just held a primary that saw the largest ever turnout in its history, with 80% of votes cast by mail. In Ohio, where Republican Gov. Mike DeWine was one of the most aggressive among his party in responding to the COVID-19 outbreak, the primary this year was all-mail-in for the first time.

A new ABC/Washington Post poll found voters support voting by mail by a margin of 65%-30%, with Republicans the least supportive at 33%. Among independents, support is 67%, and 87% of Democrats do so as well. Members of the military vote by mail and one in four Americans does so already. One of them is President Trump, who voted absentee in Florida’s primary this year and voted absentee in New York in the 2018 midterm election.

Florida is a poster child for GOP vote-by-mail. Seniors remain the most frequent voters, vote largely Republican and are a critical bloc of Trump’s support. With seniors at the highest risk for COVID-19, the Trump campaign should make sure it banks as many votes by mail as possible, given the risks of a fall resurgence of the virus. After all, if a Republican loses seniors in Florida, they lose Florida, and if Trump loses Florida, it’s likely game over for him.

Nearly 28.5% of Floridians voted by mail in 2016 and that figure rose to 31.6% in 2018, a year Republicans also won statewide in Florida. Ballots that don’t meet established criteria get discarded. In 2016, counties Trump won in Florida had a higher percentage of mail-in ballots counted. The acceptance rate for GOP mail-in ballots was 84.6% compared to 79.8% for Democrats, according to FiveThirtyEight.

In 29 states there is “no excuse” absentee voting, which means anyone can vote by mail as long as they request an absentee ballot. In 16 additional states, absentee voting is permitted with excuses, so some states are seeking to expand the criteria for excuses due to the pandemic.

The fight over expanding the absentee system is heating up in battlegrounds like Michigan, Wisconsin, Arizona and North Carolina. The RNC is committed to spending $20 million in court to fight increased use of mail-in ballots.

Ridge notes Trump encouraged his supporters in 2016 to “make sure to mail all those absentee ballots before Election Day,” and that without spending millions Trump could champion expanded absentee voting and drive up turnout. In an interview with RCP, Ridge said it’s “astonishing” the president opposes more mail-in voting considering Trump has all the advantages of the bully pulpit, a massive war chest, the massive war chest of the RNC and millions of social media followers to make the case. “Why would you not encourage a massive turnout? Why would you discourage your voters?” Ridge asked, adding, “It makes no sense.”

Absent pressure from Trump, the RNC and others, any effort to scale up mail-in voting will be difficult. The window of time to ramp up the availability of ballots, and the ability to process them, must begin now. It’s not just millions of envelopes that must meet specific criteria, but machines to process the ballots and volunteers trained to run them and systems for signature matching. Many localities have digital records making it easy to match them, while precincts with only paper records make the process much longer. The funding, experts say, must come from Congress, as states and localities are already cash-strapped from their pandemic response. The initial $400 million allocated by the CARES Act was a start, and most say the $3.6 billion in additional resources proposed by House Speaker Nancy Pelosi likely isn’t realistic, but more will be required to help election officials ramp up their existing systems.

Kim Wyman, the Republican secretary of state in Washington, has worked for decades on her state’s transition from in-person voting to expanded absentee voting to all vote-by-mail. She is talking with all other secretaries of state and impressing upon them that making changes to systems quickly, with adequate resources, is much harder than it sounds.

“Do you actually have the ability, then, to do it in a way that is going to inspire confidence? Because that is the benchmark you have to aspire to,” she said in an interview with RCP.

Wyman said local officials will have to work with local media to combat disinformation, reach voters and encourage them to learn about the options they will have. “It’s an open process,” she said. What worries her is what she described as “a toxic environment” in which she hears from both sides of the political divide a narrative that would explain their loss. For Trump, it’s that mail-in voting is fraudulent and Democrats are rigging the outcome, and for Democrats that any attempts short of delivering ballots to voters with paid postage is considered voter suppression.

“They can’t even accept the paradigm that their side could lose,” Wyman said. “We, as election officials, have to convince the losing side the election was fair.”

Both Wyman and Ridge also believe that voters will need to accept, before Election Day, that because some states allow ballots postmarked by Election Day — rather than received by Election Day — counting will take long enough that the results aren’t likely to be certified for days or even weeks after Nov. 3.

“We have from Nov. 3 until Jan. 20,” said Ridge. “As Americans have learned from COVID, we have to be patient about getting the positive results we want.”