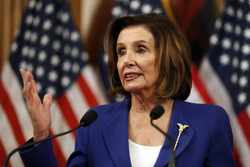 House Speaker Nancy Pelosi told “FOX News Sunday” host Chris Wallace that she does not understand why someone would oppose a quarantine order because eliminating the disease through “a quarantine is the answer to opening up our economy sooner.”

HOUSE SPEAKER NANCY PELOSI: No, not really. Because what we have to do is — is — is shelter-in- place. That is really the answer. Testing, tracing, treatment, shelter-in-place. And I do think that it’s unfortunate — but you know, people will do what they do.

But the fact is we’re all impatient. We all want out. But what they’re doing is really unfortunate because what is great, though is — are the American people. The American people know that the good health of themselves and their families and their loved ones is what is important. And that’s why you have seen such an overwhelming commitment to shelter-in-place and distancing — people distancing.

Because really it is the key to how we will open up our economy. The health issue is the key to opening up the economy. Unfortunately, this — what you see there is, you know, and I’m respectful whatever people think they should say but the fact is this has to be science-based, evidence-based, data-based.

And the evidence and the science and the data says shelter-in-place. Testing, contact tracing, treatment, quarantine is the answer to opening up our economy sooner. And I think, by the way — by the way, if I just may add. I do think —

PELSOI: — because by and large, they’ve embraced that.

WALLACE: A couple of questions I want to get in. Just this week, you called President Trump a weak person, a poor leader. Now, I understand that he goes after you. So this is fully a two-way street.

WALLACE: But do you think those kinds of partisan attacks by, in this case, you, are constructive in the middle of a national crisis?

PELOSI: Well, I’ll tell you why it came to that. I was very prayerful on Easter. It was one of the first days I didn’t have to be working every minute. And I could reflect and be prayerful. And what I decided was that the president’s made many mistakes.

OK, let’s have an after-action review of that. But if he continues to put forth proposals that were not science-based, continuing his, you know, what’d he say, it’s a hoax. It’s magically going to go away. OK, put that aside but to — to proceed with policies which were not science-based, which are not evidence-based and to blame others — blame anybody. Blame the governors, blame me, blame the World Health Organization.