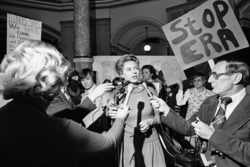 My mother, Phyllis Schlafly, had a political career of nearly 70 years, during which she learned the art of civic activism through trench warfare and positively impacted the lives of many. The problems of today can seem daunting, but fortunately we have the experiences of our elders’ available to us.

Here are the lessons I learned from my mom’s life in politics:

It’s never about the last election; it’s always about the next one. Win or lose on Election Day, the day after is the time to learn from your mistakes and evaluate your next move. The same theory holds true for votes in the legislature: Once the votes have been cast, organize for the next issue and the next vote, even if that is repealing the last vote. 1964 was a blowout loss – which depressed many Goldwater supporters, but for my mother, the lessons learned in that election made other victories possible.

A ballot does not contain an “explain your vote” section. People will vote with you for a variety of reasons. Accept their support; don’t criticize their reasons.

Not everyone will support you on every policy. Make alliances on each issue, not a total platform. People rate their issues differently from how you may prioritize yours, so work with anyone who will agree with you some of the time.

Don’t hold grudges. The art of politics is friendliness across the spectrum. If your personality is such that you tend to hold grudges, get out of politics. Your opponent in one legislative battle may be your best ally in another. Stay polite. For example, due to my mother’s kindness and professionalism, her Democratic U.S. senator never failed to wish her Happy Birthday. Stay in continual – and polite – conversations with everyone involved.

Expand your reach by making alliances across religions. Phyllis Schlafly was a Roman Catholic, but her supporters included Baptists, Church of Christ, Evangelical, Latter-Day Saints, Orthodox Jews, and more.

God is on your side, but God has a lot to do. Don’t count on God to stuff the ballot box; that’s your job.

Never apologize for your beliefs or stances, ever. Your supporters don’t need apologies, nor do they want to see weakness in a leader, and your enemies don’t value apologies. In the current political climate, the media is obsessed with getting conservatives to apologize for their beliefs. Their goal is to weaken our leaders; don’t let them win.

Everything you say or do is “on the record.” Never speak, write, email, text, post, or tweet anything that you do not want to be seen on the front page of a newspaper.

Frame the debate to win the debate. Don’t use the language that your opponents use; instead choose words that communicate your side of the issue, such as pro-life or “death tax” instead of “estate tax.” Recently, conservatives have been using the phrase “crony capitalism.” I object; there is nothing crony about capitalism. Cronyism is the elite playing favorites, which is the heart of communism. Don’t sully a good word like capitalism.

Distill your message to 60 seconds. Endlessly repeating the same message is very effective. When the media ask you questions on other topics, always answer with the message you want to send.

Choose your battles. There are countless harmful policies in the world, but not every battle is winnable. Choose battles that can be won. After all, winning is more fun than losing!

Accentuate the positive. Yes, you will lose battles, but they can become pyrrhic victories for your opponents. Barry Goldwater’s loss in 1964 led directly to Ronald Reagan’s victory in 1980 because conservatives spent 16 years building their grassroots. Learn the lessons of a defeat, but never dwell on the defeat (see Lesson No. 1).

Accentuate the negative. The easiest way to defeat bad legislation is to enumerate how individuals will be negatively affected by the proposed law. Make it personal and relatable.

Focus on the states. Most politicians are eager to get to the national limelight in Washington, D.C. But more action happens in the state legislatures. It’s easier to pass good bills and defeat bad ones in the individual states. Many are wooed by national news and not paying attention at the local level, so there’s a real opportunity for big policy wins. You can also groom the next generation of political leaders, who will remain indebted to you because you knew-them-when.

Thank people. After a vote is taken, most people move on to the next issue. Win or lose, thank those who were on your side. You want their support on the next vote, and honey catches more flies than vinegar.

Thank your supporters. Most people involved in politics are volunteers. Appreciation is their payment. Eagle Forum has given hundreds of Eagle Awards over the years to the volunteers who gave their precious time and energy.

One of my favorite quotes from my mother is, “Politicians usually have more votes before they speak than afterwards.” It is easier to like a candidate before you find out you do not agree with him/her on a particular issue. Get prepared and learn the issues that your particular audience is interested in and be ready to answer questions in a way that won’t lose their support. Plus, short speeches are more effective than long speeches. (Back to No. 9: distill your message to one minute. )

Be available. Don’t hide behind staff or layers of bureaucracy. Answer your own phone and email at any time. Our home phone number was always listed in the phone book.

Smile, smile, and smile again. Be happy and optimistic. Your supporters need encouragement, and your opponents are driven crazy by your joy.

Phyllis Schlafly was a successful grassroots organizer because she exemplified “what you see is what you get.” She believed in what she did, and her authentic voice is a model for all women. Adhering to these rules helped her, and those she counseled, win a lot of important political fights in her day. But these rules transcend time; they are ever-present in our national political scene. The philosophical base upon which they all sit is that truth, tenacity, and tireless effort can take you far — if you are willing to stand on the proper principles and fight your hardest, you put yourself in the best position of winning!