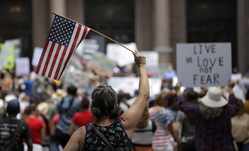 The time has come to open America back up. And if a state blocks its citizens’ efforts to open back up, they should rebel, peacefully.

We should do so responsibly, wearing masks when useful, utilizing targeted quarantines if needed, and maintaining reduced headcounts at restaurants and other public gatherings. Is the threat still real? Of course, but for the vast majority of America’s towns and cities, we can and should open up immediately.

In fact, last week I inadvertently made headlines saying as much to a virtual townhall for Students for Trump. I didn’t expect my comments to garner any attention, nor did I think what I was saying was particularly provocative. I was simply encouraging students to exercise their First Amendment rights if and when certain governors continue to extend controversial lockdowns, an infringement on our liberties which represents among of the most severe in the history of our republic.

When American citizens are being good team players, doing their part to “slow the spread” and “bend the curve,” we expect the government to respond reasonably and cooperatively. We don’t expect to see videos circulating of moms getting arrested for letting their kids play at the park, or paddleboarders getting harassed and handcuffed by the Coast Guard for paddling alone in the ocean, or stores that are otherwise open for business arbitrarily taping off whole sections that contain “nonessential items” like paint, gardening supplies, and American flags.

How are any of these measures productive? The answer is simple — they’re not, and we know it.

Americans are dutybound to push back when our government ceases to faithfully reflect our values or enacts policies that hurt the country. If other citizens disagree and push back twice as hard, they might win the argument. But our right to gather in protest is sacrosanct. In other words, what I said at the virtual townhall — and what tens of thousands of protesters are doing — should not have been controversial. We’re Americans. Of course, we’re going to protest what we perceive as tyranny.

Admittedly, not all of these protestors expressed themselves in perfect, orderly, and socially distanced fashion. It’s reasonable to ask those who assemble to maintain social distancing measures, and to wear masks in closer quarters, and to otherwise be mindful of others. But there is an inherent chaos in protesting and civil disobedience that goes all the way back to the Revolution, and that’s unlikely to stop anytime soon.

People have never assembled because it’s easy, convenient, orderly, or safe. Protesters protest because it works.

In response to citizens gathered outside the governor’s mansion (and as some state lawmakers threatened an outright mutiny) Michigan Gov. and Joe Biden’s potential running mate, Gretchen Whitmer, finally eased some of her state’s more unbearable restrictions on Friday. Despite extending a lockdown order through May 15, residents will at least be able to go golfing and boating, and they can once again travel between their homes — something inexplicably banned previously.

But it’s telling how selective the media is with the narratives they weave about different demonstrations. The Tea Party is bad, Occupy Wall Street, good. March for Life is bad, March for our Lives, good. The Women’s March and #MeToo are good; Trump rallies, bad. Anti-lockdown protestors? They might be the worst and most ignorant of them all.

During the early months of the Trump administration, you couldn’t turn on your TV without seeing a different left-wing group organizing in opposition to the president. Groups took to the streets to protest DACA, groups took to the streets to protest gun violence, and then in October 2018 they took to the offices of senators to protest Brett Kavanaugh. The very same media that propped up these protesters as heroes are now trying to demonize Americans protesting the loss of their livelihoods as dumb, deplorable and anti-science.

Listen to the experts, we’re told. Well, the experts in the American republic are the ones who are actively using their liberties and freedoms outlined in the Constitution and the Bill of Rights. And we will not sit idly by as our rights are stripped away and 26 million more Americans lose their jobs. We will rebel, protest and push back — peacefully if you let us — until America is open again.