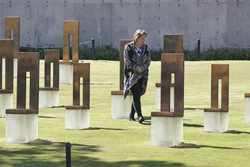 On April 19, 1995, at 9:02 a.m., the ground rumbled under my feet. My high school chemistry classroom shook and shuddered. I thought it was my first earthquake. Something much worse, indeed, sinister had taken place – an act of domestic terrorism 15 miles away in downtown Oklahoma City.

The world would learn that Timothy McVeigh had detonated a bomb – two and a half tons of ammonium nitrate and fuel oil crammed into the back of a Ryder truck parked at the north entrance of the Alfred P. Murrah Federal Building.

In the days following the explosion, a high school intercom was my primary source of information as it announced survivors’ names or, tragically, called a student to the main office to receive heart-wrenching information. Each time the intercom crackled to life, everyone knew it would bring either immense relief or excruciating pain. There was no in-between.

The blast collapsed half of the building within seconds and killed 168 people. As details of this horror in the heartland emerged, the death toll included 19 children, eight federal law enforcement agents, six military personnel, as well as mothers, fathers, sons, daughters, brothers, and sisters.

Yet in the wake of this unspeakable evil, the best of the human spirit came forth. I saw firsthand that great American tradition of resiliency in the face of adversity. As my friends and I ran water to rescue workers at the blast site, I watched a community come together and the Oklahoma standard emerge: acts of service, honor, and kindness.

I will never forget that day in April. It was moment that started me on a path to public service as a federal prosecutor. Working together, the Department of Justice and state and local law enforcement pursued justice for the hundreds of families shattered and 168 souls lost that morning. Their immense efforts ultimately resulted in the convictions of McVeigh and his co-conspirator Terry Nichols.

Historians and investigators alike have traced the roots of McVeigh’s motives, in part, to his extremist anti-government views anchored in the far-right’s militia movement. He despised the federal government’s enforcement actions at Ruby Ridge, a confrontation between the FBI and a family of white separatists in northern Idaho, and at the seizure of the Branch Davidian compound in Waco, Texas.

McVeigh was also influenced by the explicitly racist writings of William Pierce in The Turner Diaries, a novel describing the violent overthrow of the United States and a race war resulting in the extermination of non-white persons.

Unfortunately, these views persist today as social antagonists and violent extremists reach new audiences through the internet. In 2015, a Charleston, South Carolina church shooting resulted in nine African-Americans being killed during a Bible study. In 2017, a bigot plowed his car into a crowd of protesters at a white supremacist rally in Charlottesville, Virginia. In 2018, a man is alleged to have attacked a Pittsburgh synagogue and killed 11 Jewish worshipers during their Shabbat morning services. In 2019, a gunman targeting Hispanics killed 22 people in the racially motivated El Paso shootings.

This dreadful list of hateful anti-government and racially motivated acts might go on and on, except for the transformative power of our nation’s good-hearted millions. Individuals who subscribe to the failed ideologies of white nationalism and harbor hate reappear throughout American history. Their right to speak and think is protected under the First Amendment. However, as one of my colleagues has noted, extremists are not guaranteed a receptive audience.

Just as the citizens of Oklahoma City did in 1995, Americans continue to reject ideologies of intolerance, hate, and racial superiority. The coward McVeigh inspired neither a revolution nor a race war. Those who follow in his misguided footsteps will meet a similar fate.

No doubt, extremist ideologies are serious and threatening, and they cannot be merely wished away with words. Moral clarity and commitment to the rule of law are required to overcome them. But when a bigoted ideology manifests in a violent plan or act, the public servants of local, state, tribal, and federal law enforcement will be ready to respond.

We remain vigilant about the threat of domestic terrorism to our houses of worship, businesses, and government buildings. We use all available tools to stop violent extremists – to disrupt and engage them before they act, and to hold them accountable when they do.

Those who perpetrate evil against America intend to create fear and confusion. But their craven acts only strengthen our resolve. Extremist ideologies run against the grain of our democracy and are poorly matched against our innate appreciation of justice and equality and love of liberty.

Day after day, week after week, law enforcement across America fulfills the message first emblazoned by a member of “Team 5” – a group of first responders who dug through rubble on April 19, 1995 – on the side of the Journal Record Building in downtown Oklahoma City, 25 years ago today. “We search for the truth. We seek justice. The courts require it. The victims cry for it. And GOD demands it!”

R. Trent Shores is the U.S. Attorney for the Northern District of Oklahoma.