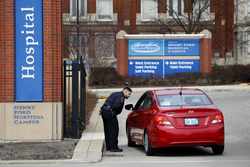 The great irony of our (nearly) nationwide lockdown is that measures taken to protect us may actually be harming the nation’s public health. In March, the Centers for Disease Control and Prevention recommended that health care providers postpone “elective” procedures to free up resources to treat coronavirus patients. Governors have also ordered doctors to reschedule “non-essential” appointments. Many doctors have advised patients with serious illnesses to forgo taking immunity suppressing drugs for fear that they might contract COVID-19. And the sanctimonious “listen to the experts” crowd will shout down anyone who dares to question the prevailing “stay home” wisdom.  But I know from personal experience how important it is to address medical problems quickly before they get worse.

I have two autoimmune diseases and a variety of medical problems that have arisen as a result of them. I take three immunity-suppressing medications, including hydroxychloroquine — the “unproven” drug that’s widely distrusted by Democrats because President Trump has promoted it. I’ve had a host of medical appointments and one surgical procedure (on my left eye) cancelled in recent weeks. Because I had one coronavirus symptom, my doctor advised me to get tested for it as a precaution. Based on everything I’ve heard and read in the media, I thought this would be difficult and perhaps risky. But as it turned out, there was a drive-thru facility right near my home and the process was safe, efficient and took less than 10 minutes from start to finish. I found out that I did not have coronavirus in less than 48 hours.

Hopefully, my postponed medical appointments and tests won’t hurt me, but I hate not being able to address medical problems promptly because I know all too well how important early detection of illnesses is to good health outcomes. In January 2017, I experienced unexplained inflammation in my right foot. I saw a doctor but unfortunately he didn’t promptly refer me to a specialist and by the time I was diagnosed nearly four months later, the inflammation had spread around my body. As it turned out, I have a rare skin disease called pan-sclerotic morphea. I will be living with the consequences of the late diagnosis my whole life.

Thousands or perhaps even millions of Americans have untreated and undiagnosed medical conditions right now that aren’t being addressed because of our singular focus on mitigating COVID-19. The former chief of neuroradiology at the Stanford University Medical Center wrote a recent op-ed in The Hill warning that “critical health care for millions of Americans is being ignored and people are dying to accommodate ‘potential’ COVID-19 patients and for fear of spreading the disease.” And the CEO of the Cleveland Clinic told The New York Times that they’ve seen a “dramatic decline in people seeking care for heart attacks, strokes, or new cancers.”

Who will calculate the cost of effectively shutting down our medical infrastructure for all but COVID-19 treatment and emergency care? Emergency rooms are open but visits to them are down dramatically across the country because people are afraid. Hospitals are struggling because most can’t survive without the revenue they earn from elective procedures and testing. Oxford Economics forecasts that 1.5 million “non-essential” health care workers will join the millions of other Americans on unemployment lines in April. Some hospitals and medical clinics may never reopen.

Meanwhile, New York City has more fatalities than 41 states combined and, as of April 29, 20 states had fewer than 200 COVID-19 deaths and seven others had fewer than 300. Yet in most of these states where coronavirus has taken a more modest death toll, many hospitals are like ghost towns. Even once our policymakers give us the green light to see our doctors again, some, perhaps many, Americans will be afraid to return to hospitals and clinics, while others may find long delays as clinics struggle to cope with appointment backlogs. And what about the millions of Americans who have lost their jobs and their health insurance and can’t afford to address their medical problems?

Forty-five governors have shut their states down, including some lightly hit states like Maine (52 casualties so far), Oregon (99), Idaho (60), and New Hampshire (60), among many others. They will argue without evidence that their relatively low death tolls are a direct result of their orders. As some states prepare to reopen, we’ve seen a torrent of stories about how irresponsible this supposedly is.

The media have stoked irrational fear and turned what could be a unifying crisis into a divisive partisan spectacle. Many activists posing as journalists have established some very clear but perverse COVID-19 ground rules: Anyone who dares to question indefinite lockdowns wants people to die. Some, like the race-baiting MSNBC pundit Joy Reid, have gone so far as to say that lockdown doubters want people of color to perish.

We’ve also damaged the nation’s public health by preventing millions of Americans from getting much needed fresh air and exercise, closing down parks and preventing people from playing sports that are great for social distancing, including tennis and golf. Never mind the fact that a recent study of more than 300 outbreaks in China concluded that outdoor transmission of the virus is very rare.

Franklin Roosevelt famously said, “The only thing we have to fear is fear itself.” His wife, Eleanor, once said, “Do one thing every day that scares you.” It’s time to take their advice.

The media should cover the pandemic responsibly so that people take it seriously and follow social distancing guidelines. But unfortunately, far too many news outlets have crossed the line, sowing fear that’s stopping people from addressing serious medical problems.

I’m not suggesting that we should stage a Live Aid style concert in Central Park or advising people to run out and get tattoos in Queens right now.  But I also think it’s reasonable to expect that the elderly, people like me with suppressed immunity and those who live in hard hit places to have a different safety protocol than say, a healthy young person living in South Dakota.

Americans need to be reminded that emergency rooms are still (mostly) open and are finding ways to keep everyone safe. And medical facilities in not so hard hit states need to reopen in a responsible way for non-emergency care, because the long-term consequences for continuing on the indefinite shutdown path we’re on are scarier than the pandemic itself.

Dave Seminara is a journalist and former diplomat. He is the author of “Breakfast With Polygamists: Dispatches From the Margins of the Americas.”