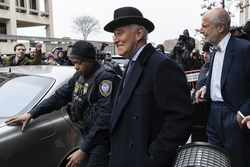 Almost any list of top newsmaking and colorful political personalities in recent U.S. history would include Roger Stone. An unconventional Republican operative since the 1970s, Stone hit the apex of his flamboyant career in 2016 with the election of his longtime friend and former client Donald Trump.

That achievement was the focus of a popular 2017 documentary, “Get Me Roger Stone.” In a January 2019 piece I wrote for RealClearPolitics, I noted that the film compares Stone to “Forrest Gump, the fictional character who found himself at the center of every landmark political and cultural event in the mid- to late-20th century.”

Roger now finds himself in an unexpected predicament, one that has him praying, literally, that Trump will grant him a presidential pardon. Two months ago, Stone was sentenced to 40 months in prison after being convicted on five counts of lying to Congress, one count of witness tampering, and one count of obstructing the congressional investigation into Russia’s interference in the 2016 election. Upon hearing the sentencing news, Trump said, “I’d love to see Roger exonerated.”

Last week, a federal judge denied Stone’s motion for a new trial, sought on the grounds of alleged bias and misconduct by the jury foreperson at his 2019 trial. But there was a nugget of good news in the decision: The judge lifted a controversial 16-month gag order so he can now speak freely about his ordeal.

The following evening, Stone appeared on Tucker Carlson’s highly rated Fox News show, noting that his jail term “is essentially a death sentence” given his age (67). But during the long, drawn-out legal process, Roger has turned to Jesus. In his own inimitable way, he has been very public about this change of heart.

As someone who frequently writes about Christianity, and who has conducted several interviews with Roger, I asked he would answer some personal faith questions. He agreed.

Myra Adams: Can you explain the journey that led you to tell Mike Allen during an “Axios on HBO” interview — the first after you were sentenced to 40 months in prison —  that “I feel pretty good because I’ve taken Jesus Christ as my personal savior,” but feared “not being right with God”?

Roger Stone: I had been raised a Roman Catholic and received all my sacraments in that church. I always had a fundamental belief in God, although it is certainly fair to say that I lived a pretty wild lifestyle and strayed from His path.

There were no thunderbolts from Heaven or sudden revelatory moments until one Saturday this past January. On that day, I had made arrangements to meet with Rev. Franklin Graham at his revival in South Florida. While I planned to solicit his support for a presidential pardon, he gave me something far more valuable.

Reverend Graham made it clear it was not his support that I needed. He said the answer to my plight was to invite Jesus Christ into my heart and my life because if I did so, he would protect me and never abandon me.

We prayed together for a few moments, and then I attended his revival, which had drawn well over 2,000 Christians.

Reverend Graham is a powerful speaker. There was the moment when he called upon those ready to change their life and be cleansed of their sins. We were asked to stand and take a simple pledge in which you acknowledge your sins, ask for forgiveness, and invite Christ into your life. I felt the need to stand with several hundred others and change my life. It was at that moment that I saw the clear path ahead. It was as if a cement block had been lifted from my chest, and I left the arena with a feeling of peace and relief.

MA: Can you describe both the positive and negative feedback you have received after the Axios interview and in the ensuing weeks when discussing your “new” faith on numerous media platforms?

RS: Needless to say, because I come from the rough-and-tumble world of politics, there are a fair amount of skeptics who believe that my claim of redemption is a head fake and that I am merely posturing for public sympathy.

Ironically, many thought the same thing of former Nixon aide Charles Colson, who went to prison for this role in the Watergate scandal. Yet Colson went on to form a prison ministry, which has profoundly affected the lives of thousands of people by helping them find the path to redemption through Jesus Christ. I do not really care what the skeptics say, because He knows what is in my heart.

MA: Speaking of Colson, his April 21, 2012, obituary in the New York Times was headlined “Charles W. Colson, Watergate Felon Who Became Evangelical Leader, Dies at 80.” Then it continues, “who as a political saboteur for President Richard M. Nixon masterminded some of the dirty tricks that led to the president’s downfall.”

Roger, surely “dirty tricks” must resonate, given how your name and that phrase are virtually inseparable.

Furthermore, Colson’s first book, written in 2008, was his memoir “Born Again,” which became an inspirational bestseller. Since you are a prolific author, do you have any plans to write about your faith journey?

RS: I am most definitely working on a book that outlines the entire ordeal of being the target of a political prosecution. It will discuss the way a broken justice system can strip you of all your rights, including your right to free speech, the ability to make a living and provide for your family in the blink of an eye. This book will certainly include my decision to reaffirm my faith in Christ and the critical role it has played, giving me the strength to continue to fight for my exoneration.

MA: How have you turned your faith journey into action?

RS:  I have returned to the Catholic Church of my parents and grandparents, and while I do not believe strictly in all of their dogma, I am comfortable with the Church’s belief in the Holy Trinity and Jesus Christ as the only begotten Son of God. Father Michael Grady of Saint Anthony’s Church in Fort Lauderdale has advised me on the single hardest part about being a Christian: forgiving those who have trespassed against you. I believe that a number of those that have persecuted me are truly evil and actually in league with Satan, and I struggle every day to forgive and pray for them. It is the single most difficult thing that my reaffirmed faith requires.

MA: Now that the judge has denied your motion for a new trial based on your contention of egregious juror misconduct, and you could be facing prison near the end of April, how do you feel?

RS: Serene. The matter is in God’s hands. While my new lawyers are excellent, and our legal options are many, the next act in my career will be guided by Jesus Christ, and I have placed full faith in Him.

MA: Are you praying for President Trump to grant you a pardon?

RS:  Yes, but I repeat: My full faith is in Jesus.

Myra Adams is a media producer and writer who served on the McCain Ad Council during the GOP nominee’s 2008 campaign and on the 2004 Bush campaign creative team.