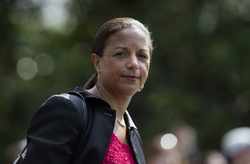 This same week, former Obama administration national security adviser Susan Rice, a Democrat notorious for her lack of credibility, was back in the news. Unsurprisingly, the media are all too happy to take Rice at her word regarding new information about her role in the controversial prosecution of former Trump national security adviser Michael Flynn. It was all a reminder, as if any was needed, that you can tell all the tall tales you want and make the most implausible assertions, and the media won’t care so long as they are at Donald Trump’s expense. Susan Rice is reportedly even on the short list for vice president on the 2020 Democrats’ ticket.

The week’s case study in double standards in the press came when the administration declassified a portion of a bizarre email Rice wrote to herself just minutes after Trump was inaugurated, chronicling the events of a Jan. 5, 2017 White House meeting in which President Obama and other top officials discussed surveilling Trump’s incoming national security adviser. Rice claims she was directed to memorialize this version of events at the Flynn meeting by Obama’s White House counsel, which is curious to say the least.

And yet. “The Susan Rice email isn’t any sort of smoking gun,” heralds CNN’s Chris Cillizza. In case viewers missed it, John Avlon, also at CNN, made the same assertion in the same language. MSNBC went further: The gun may not be smoking, or even loaded, but it’s going to backfire. “Republicans thought they’d uncovered a smoking gun,” proclaimed MSNBC. “They failed to realize it was pointed in the wrong direction.”

All of this dismissive analysis relies on the assumption that Rice is telling the truth – a dubious assumption on its face, and especially so for someone with her track record.

Following the attack on an American compound in Benghazi that killed the U.S. ambassador to Libya and three other Americans on Sept. 11, 2012, Rice made a series of false statements on national news programs. The Obama administration was spinning a narrative it knew to be untrue: namely, that the attack was a spontaneous uprising due to a blasphemous YouTube video produced in California, not a preplanned terror attack. Rice had been Obama’s original pick to replace Hillary Clinton as secretary of state, but her statements about Benghazi made Senate confirmation all but impossible.

In 2014, after the Obama administration had secured the release of Bowe Bergdahl, an American soldier held captive by the Taliban, Rice again appeared on television to assure us Bergdahl “served the United States with honor and distinction.” Bergdahl later pleaded guilty to desertion in a court martial, and fellow soldiers accused him of getting truly honorable soldiers injured or killed while trying to find him. While Rice was trying to paint Bergdahl as a hero, people were soon speculating that releasing five Taliban in a prisoner swap appeared to be part of Obama’s politically unpopular plan to shut down the terrorist holding facilities in Guantanamo. At least one of the Taliban exchanged for Bergdahl tried to resume terror activities.

In January 2017, Susan Rice went on NPR and bragged that “We [the Obama administration] were able to get the Syrian government to voluntarily and verifiably give up its chemical weapons stockpile.” There was a brutal chemical weapons attack in Syria three months later. Subsequent congressional testimony by Gen. H.R. McMaster made it clear that Rice and the Obama administration were wrong.

And in April 2017 – just days before the chemical weapons attack in Syria – Bloomberg’s Eli Lake reported Rice was responsible for “unmasking” the identities of Trump officials in intelligence intercepts, which possibly led to any number of media leaks. Asked on “PBS NewsHour” whether she did this, Rice said flatly, “I know nothing about this.” We now know that this was not true.

Despite being a recidivist offender, media outlets have largely accepted Rice’s whoppers uncritically. PolitiFact has yet to fact-check Susan Rice even once, though it was forced to retract an odd fact-check rating the claim that Syria had no chemical weapons as “mostly true.”

When the story about Rice unmasking Trump officials leaked, CNN simply ran chyrons declaring the story “false,” while on-air personalities dismissed the controversy by saying things such as, “We won’t insult your intelligence” and “This appears to be a story largely ginned up, partly as a distraction from this larger investigation [into the Trump administration].”

Which brings us to the latest revelations into said fruitless, years-long investigation into whether the Trump campaign colluded with Russia. According to Rice’s declassified email, those in the meeting with President Obama expressed concern that Flynn was speaking with the Russian ambassador before the new administration had been sworn in. Of course, speaking with Russians is part of the job description when you’re national security adviser, which Flynn would have been in a few days, so the nature of their beef has always been unclear. Nonetheless, Rice records that then-FBI director James Comey repeatedly said he’d investigate Flynn “by the book.”

Flynn eventually pleaded guilty to lying to the FBI, though the circumstances that led to that plea are now hotly debated. For one thing, Comey has since boasted in a televised interview that he disregarded FBI policy of notifying the White House before interviewing senior personnel. The FBI’s top counterintelligence officer took notes ahead of the Flynn interview asking, “What’s our goal? Truth/Admission or to get him to lie, so we can prosecute him or get him fired?” And the FBI’s handling of the records of the interview in which Flynn allegedly lied was “truly bizarre,” according to veterans of the bureau. The Flynn investigation was a lot of things, but “by the book” it was not.

To the nonpartisan eye, the email reads like a last-ditch attempt to lay any problems with the Flynn investigation at Comey’s feet – and perhaps discourage tough questions about what role Obama may have personally played in directing the investigation. Why else would White House counsel be telling Rice to write up what happened at the meeting weeks after the fact?

Maybe the Rice email isn’t a smoking gun, but that’s hard to say unless the media do a lot more reporting and start demanding answers. The media’s basic problem has been assuming that if Trump’s a liar, everyone arrayed against him must be telling the truth.