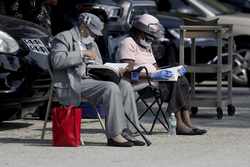 Since last month when government officials at all levels began to direct Americans to practice social distancing, avoid events involving more than 10 people, stay at home, and shelter in place, public gatherings have been discontinued without much fuss or fanfare. Bars and restaurants, theaters and concerts halls, and even professional sports quickly and quietly closed their doors, turned off their lights, and sent employees home for the duration. In contrast, efforts to prevent the faithful from gathering to worship have provoked controversy, which provides a reminder both of the persistence of religious intolerance and of the centrality of religious liberty to American constitutional government.

In late March, New York Mayor Bill de Blasio made headlines by threatening to shutter houses of worship. “Everyone has been instructed that if they see worship services going on, they will go to the officials of that congregation and inform them that they need to stop the services and disperse.” If the faithful do not conform, Mayor de Blasio warned, city authorities “will take additional action up to the point of fines and potentially closing the building permanently.”

As RCP staff writer Susan Crabtree reported, “It wasn’t so much the ban on religious gatherings that bothered spiritual leaders. Most churches, synagogues and mosques were already abiding by similar rules aimed at flattening the pandemic curve put in place across the nation. But the threat of closing down churches and other religious groups forever sparked the biggest backlash.”

Mayor de Blasio was not the only public official to rile the religious by exceeding his authority. In Virginia, Gov. Ralph Northam, and in Michigan, Gov. Gretchen Witmer also directly targeted religious gatherings, provoking strong reaction in defense of religious liberty. In Louisville, Ky., a federal court had to step in to prohibit the mayor from unconstitutionally banning Easter Sunday drive-in church services while permitting similar accommodations for restaurants and liquor stores.

To explain the numerous clashes between the authorities and religion, in contrast to the swift compliance of dining establishments, arts centers, and athletic contests with the imperatives of COVID-19-America, it is useful to turn to the Constitution. The American political tradition does not regard religion as one activity among all the rest, to be tolerated consistent with the rights of others. The Constitution accords religious liberty a position of preeminence, placing it at the head of the Bill of Rights, the first of the several freedoms enumerated in the First Amendment.

By why does a charter of government that revolves around individual freedom and limited government confer such an honor on religion? And why, more than two centuries later and in a decidedly more secular age, should citizens respect that founding judgment?

A pair of essays in National Affairs’ spring issue offers answers. In “Religious Liberty and the Common Good,”William J. Haun argues that religious liberty serves the public interest because it “is a prerequisite to, and sustainer of, self-government.” In “Proxy Wars Over Religious Liberty,” however, Ryan Anderson cautions, “[w]e’re asking too much from religious liberty in expecting it to be our only response” to a variety of contemporary threats to freedom and democracy in America. Between them, the two essays show that while religious liberty is a precondition for the preservation of the full range of rights the Constitution secures, litigation and the appeal to constitutional formalities alone are not enough to vindicate the principles cherished by people of faith.

Counsel for the Becket Fund for Religious Liberty, Haun traces the view that religion is essential to the public good in a free society to James Madison’s 1785 “Memorial and Remonstrance Against Religious Assessments.” In opposing a bill in the Virginia legislature to impose a tax to support the teaching of Christianity, Madison, following John Locke, argued that religion is an “unalienable right.” The right is unalienable because the duty one owes to God is prior to and higher than the duties of political society, and because the satisfactory discharge of religious duties cannot be coerced but rather must be performed based on “reason and conviction.”

By protecting the unalienable right to religious liberty, constitutional government serves not only religion but also politics, argues Haun: “Ensuring space for the fulfilment of religious obligations provides an enduring limit on state power — not merely to manifest ‘choice’ or ‘self-expression,’ but to fulfill duties.”

However, the opportunity does not guarantee the fulfilment. To carry out duties — owed not only to God, but also to family, friends, community, and country — requires the exercise of virtues. In his 1796 Farewell Address, President George Washington gave expression to the common Founding-era conviction that religion is a chief source of the virtues that maintain free societies.

Haun adds that in the 19th century, Tocqueville argued in “Democracy in America” that religion in the United States made a distinctive contribution to politics by counteracting the very vices that liberal democracy tends to encourage. In giving citizens wide latitude to manage their affairs and by encouraging individuals to see themselves as no less capable than anyone else to decide how best to pursue happiness, liberal democracy can unleash self-indulgent passions and emancipate utopian — and dystopian — fantasies. By emphasizing duty — not least the biblically based duty to respect the inherent dignity of each individual — religion in America reins in the passions, disciplines the imagination, and keeps citizens mindful of the responsibilities that accompany rights.

The multi-layered appreciation of how religious liberty fortifies liberal democracy, writes Ryan Anderson, may impel some activists to overemphasize it in contemporary public-policy debates. “It is important to recognize the proper limits of religious-liberty arguments, he advises, “not because those arguments don’t run deep but precisely because they do.”

A senior research fellow in American principles and public policy at the Heritage Foundation and a teaching fellow in social thought at the University of Dallas, Anderson contends that in recent years activists have compressed controversies about abortion and contraception into lawsuits about religious liberty. He believes that this has come at the expense of “addressing the substantive moral debates that actually divide us in the culture war.”

As a legal strategy, Anderson stresses, the focus on religious liberty is sound: “In a legal culture in which a contraception mandate exists, where the [Supreme] Court has declared a constitutional right to contraception and to abortion, legal arguments that stake their force on the truth of underlying moral arguments have little chance of success.”

The concentration on litigation built around religious liberty, however, is a defensive strategy that reflects a weakening of religious faith and a loss of understanding about the link between religion and limited government. “A 21st-century case for religious liberty has to recognize the unique circumstances of religious believers and moral traditionalists in our time,” observes Anderson. Whereas in the founding era, the goodness of religion was assumed and the public debate revolved around whether faith and worship must be voluntary, today it is assumed that the faith and worship must be voluntary, and the public debate revolves around whether religion is good. Consequently, maintains Anderson, “in our time in particular, the case for religious liberty must be part of a larger public argument for and from the underlying truths that religious people seek to defend and advance.”

As the global pandemic compels the United States to protect freedom in the long term by adopting near-term emergency measures that restrict freedom, it is crucial to remain mindful of constitutional powers, constraints, and purposes. Recovering an appreciation of the centrality of religious liberty to American constitutional government — and to the full range of rights that it is the Constitution’s chief mission to secure — serves our long-term interest in protecting freedom.

Peter Berkowitz is director of the State Department’s Policy Planning Staff and a member of the department’s Commission on Unalienable Rights. He is on leave from the Hoover Institution, Stanford University, where he is the Tad and Dianne Taube Senior Fellow.