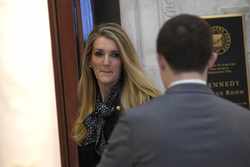 Kelly Loeffler joined the Senate in January, appointed by Georgia Gov. Brian Kemp to replace retiring Republican Johnny Isakson. But she entered the political big leagues on March 19. That was the day the Daily Beast broke a breathless story about her personal finances.

“The Senate’s newest member,” the Beast’s reporters wrote, “sold off seven figures’ worth of stock holdings in the days and weeks after a private, all-senators meeting on the novel coronavirus that subsequently hammered U.S. equities.”

Take a moment to admire the storytelling craft in that passage. The Daily Beast’s reporters make perfectly clear what they want readers to infer, without ever explicitly overstepping the rather unremarkable facts of the case: Millions of dollars in stock! A “private” briefing on coronavirus! Stocks hammered!

It would be a juicy story — if not for a few inconvenient facts.  Fact No. 1: Sen. Loeffler and her husband lost more than $1 million on the trades in question. Fact No. 2: They don’t actually manage their own investment portfolios; Fact No. 3, the “private” briefing came from federal officials who said the new coronavirus was nothing to worry about.

Subsequent news coverage would note that stocks sold by Loeffler and her husband — Jeffrey Sprecher, chairman of the New York Stock Exchange — declined by 30% or more after the sales. Doug Collins, Loeffler’s chief Republican rival for the Senate seat, declared himself “sickened” that Loeffler was “profiting off [the] pain” of those hurt by the pandemic and the government response to it.

Except there was no “profit.” What’s more, as the senator has maintained from the start — and her own disclosures to the Senate seem to confirm — neither Loeffler nor her husband have day-to-day knowledge of the trading activities of their portfolio managers.

On Jan.  24 — the day of the “private” meeting with Dr. Anthony Fauci and officials from the CDC, among others — the Dow Jones Industrial Average stood at 28,989. It was not for another month — on Feb. 21 — that the DJIA fell below 29,000 and stayed there. If Anthony Fauci and epidemiologists unveiled secret information to the entire Senate that led Loeffler to sell, sell, sell — as the Daily Beast and follow-up coverage elsewhere implied — why was the stock market essentially flat for four weeks afterward?

It is true that by March 19, when the Daily Beast article first appeared, stocks had been “hammered.” On that day the DJIA closed at 20,087 — off about 30% from its level on Jan. 24. Ironically perhaps, the stock market bottomed out just two trading days after the article, and is now up nearly 24% from those lows.

In other words, the markets went down after this Senate briefing — but not particularly soon after the meeting or in any way that seems correlated with anything the senators might have learned at it. So what did they learn? It’s not clear. But we do know that two days after that briefing, on Jan 26, Dr. Fauci said publicly: “The American people should not be worried or frightened by this. It’s a very, very low risk to the United States.” The director of the CDC agreed with Dr. Fauci at the time, saying that the information they had made them “pretty certain that this was not transmitted human-to-human,” according to Fox’s Brian Kilmeade.

These do not sound like the views of people who went before the Senate and told them the world was about to end. In any case, Sen. Loeffler’s investing activity was hardly consistent with that of someone who’d gotten the secret sign that the markets were about to collapse and she had better get out fast. According to her Periodic Transaction Report, filed March 12, the couple’s money managers had entered into 22 transactions in January — including one, it is true, on Jan. 24.

Six of the reported transactions were sales of complex “put options” on companies including Goldman Sachs, Chevron and Discover Financial, among others. The Discover put sale serves as a good example. On Feb. 5 — more than a week after the Senate briefing — Sprecher’s portfolio manager sold someone the right to force him to buy up to $15,000 of Discover Financial Services (DFS) stock at $72.50 per share. At the time, Discover was trading above $77 per share, so the put was worth little. Today, with DFS trading around $36 per share, the right to sell it at $72.50 is worth a great deal more. And, to be clear, Loeffler and her husband were on the losing end of that trade.

CNBC, in apparent attempt to support the narrative that the Loefflers were acting on inside information, described their option trades as “hedges against volatility.” Except that if you wanted to hedge against volatility associated with a major market sell-off, the last thing you would do is sell puts in oil, airline or financial companies. Because of the way options prices respond to increased volatility, you would buy puts to hedge against that type of volatility explosion. CNBC, which one would expect to know better, ignored the fact in its coverage that selling puts is also a directional trade — selling a put is a bet that a stock will not fall below a certain price, or will rise above that price. Sen. Loeffler herself called selling puts “a bullish strategy.”

Selling a bunch of puts, in other words, is simply not what one does if one anticipates a huge market sell-off. The couple’s portfolio managers even sold puts on Delta Air Lines on Feb. 4, at a strike price of $52.50. Delta has traded in the low $20s for most of April, so that put is now quite valuable — to whoever was on the other side of that trade.

There is no systematic evidence in Loeffler’s disclosure forms of any attempt to profit from the pandemic or the policy response. The timeline doesn’t fit. The trades are, at best, all over the place. The private meeting in question almost certainly did not sound the alarm about what was coming at the end of February and into early March — more than a month later.

In addition, Loeffler and  Sprecher seem not to have had real-time knowledge of what was happening in their portfolios. The senator’s March 13 disclosure, which triggered the original Daily Beast story, and so was necessarily made before her investing activity was called into question, states that she was notified of the trades “on or after Feb. 16.” That’s three weeks after the fateful Senate briefing from Dr. Fauci.

The media’s general attitude has been to treat this profession of ignorance as implausible and/or irrelevant. But Loeffler and her husband are not just any rich people. They have both spent most of their professional lives in financial services — and in Sprecher’s case, as a senior executive at one of the most important stock exchange companies in the world. So putting their personal financial transactions at arm’s length is a long-standing practice. Even before she joined the Senate, Loeffler says, it “was important to us to avoid even the appearance of acting on or having inside information.”

Lastly, by talking up the “millions” in stock sales by Loeffler and her husband, the reporting on the story has obscured the fact that when you’re worth some $800 million, the sale of a few million worth of stock is not that remarkable. “The transaction volume [in our transaction reports] is consistent with the transaction volume in our portfolio before I joined the Senate,” Sen. Loeffler told me in a recent interview. The trades in question, she said, represent “a single-digit portion of our net worth.” They have since, out of an abundance of caution, liquidated all their holdings of individual stocks, she added.

But politics ain’t bean bag, as they say. And as Doug Collins’ own reaction made clear, even her fellow Republicans aren’t above seizing on a reed-thin story if it might advance their own careers. It remains to be seen whether the junior senator from Georgia has had to learn that the hard way.