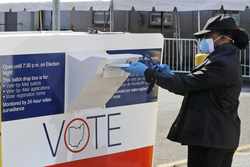 RealClearPolitics recently published a news story and a column both of which made the astounding assertion that 28 million mail-in ballots went “missing” over the last four general elections. If true, it could be a major stain on the mail-ballot voting process.

But it is not true. Here’s why. Both pieces used the term “missing” to describe ballots that were mailed out to voters but not cast by those voters. By this logic, all of the over 250 million votes not cast by in-person Election Day voters from 2012 to 2018 are also “missing.”

Conflating voters choosing not to cast their ballot with “missing” ballots is a fundamental flaw in the argument against a voting system that is tried and true, with over a quarter of a billion votes cast nationally from mailed-out ballots since 2000.  In this time when election officials are working to allow voters to participate without putting their health in danger, it is important that this system is evaluated with facts, not misconstrued data.

The simple fact is: An un-cast ballot is not a missing ballot.

Let’s look at the numbers: The articles claimed that 28 million mailed ballots were unaccounted for and therefore were “missing.” We will start with the three states that mailed a ballot to every active registered voter in that period: Colorado, Oregon, and Washington. Those states averaged roughly 10 million registered voters combined during that span, resulting in roughly 40 million ballots mailed out over those most recent four general elections.

Turnout in the four elections for those states ranged on average from 60% in 2014, 65% in 2018, to 75% in 2016 and 78% in 2012. If we call it about 70% turnout across the four elections, that means that roughly 28 million mailed out ballots were cast by voters, leaving the remaining 12 million mailed-out ballots “un-cast” — not missing. For perspective, the United States averages about 50% turnout for general elections.

So, of the 28 million “missing” ballots, we have quickly accounted for 12 million, leaving 16 million to “find.”  While Colorado, Oregon and Washington sent ballots to all of their voters each election, other states allow voters to request a ballot in the mail but do not automatically send them to everyone. About 30 million ballots were mailed out every general election to voters from states with “excuse required” absentee policies, to those with “no excuse required,” and to “permanent absentee” voters. This amounts to roughly 120 million over the period analyzed. Those 16 million “unaccounted” for ballots comprise only 13% of the 120 million total ballots sent out. In other words, those voters who asked for a mail ballot in a state where they had to request one ended up voting at an 87% rate — 30% to 40% higher than the national turnout average.

You’ll notice there’s a disparity between the turnout rates for ballots mailed to all registered voters and ballots mailed only for those who request them. Mailing ballots to all voters inevitably includes a percentage of voters who will not vote either by mail or in person, resulting in higher percentages of “un-cast” ballots. That being said, in both the “opt-in” (ballot request) and “opt-out” (all voters mailed) models, voter turnout is dramatically higher than in-person voter turnout.

In addition, since voting by mailed-out ballot has become more prevalent, there are many best practices in use that prevent any wide-scale ballot mishandling. Now is the time to equip election officials to handle the dramatically increased mail ballot requests they are currently receiving — not blame them under false pretenses.

Jurisdictions now extensively partner with the USPS’s National Change of Address program as well as ERIC (the Electronic Registration Information Center) to keep their voter address files current.  Mailed-out ballots are non-forwardable, so there can’t be millions of ballots floating around within the USPS. They are returned to the election office.

Thirty-six states have instituted “ballot tracking” where both the voter and election officials can see where the ballot is en route to and from the voter, just as you would a package. If the ballot really does “go missing,” the voter can be notified and obtain a new one. But the data shows ballot misplacement very rarely happens.  Return ballot envelopes are signed by the voter and those signatures are reviewed by election judges trained by law enforcement.  Mismatched or unsigned ballots have a “cure” process to make sure the voter has a chance to verify their identity (often with a photo ID) and have their ballot count. And as to potential fraud, you are about five times more likely to be hit by lightning than to have a mailed ballot fraud conviction in your state.

In the high mailed-out ballot states, well over 50% of cast ballots are returned at secure ballot drop boxes or at staffed “vote centers” that look like traditional polling places, but without the lines. Jurisdictions can (and should) provide prepaid postage for those remaining voters who wish to return their ballots by mail the same way they were received.

Best practices like these are employed in many jurisdictions today and need to be expanded along with the increased use of voting at home. The National Vote at Home Institute is working with states at all stages of the process to ensure that these safeguards and more are in place across the country.  Let us focus on making sure every voter can participate safely in 2020, and beyond. With retained in-person options for those who need it, voting at home is the secure way to go.

Amber McReynolds is the CEO of the National Vote at Home Institute (NVAHI) and the former director of elections for Denver. She also serves on the National Election Task Force on Election Crises and is the co-author of “When Women Vote.”