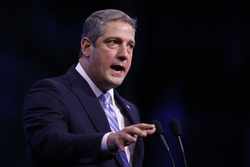 A year ago Rep. Tim Ryan of Ohio had kicked off his candidacy for president of the United States and was traveling the country raising money, trying to break through in a crowded Democratic field. As a moderate making a long-shot bid in what then seemed a doggedly progressive party, Ryan could imagine that come the spring of 2020 he might not be his party’s nominee. What he couldn’t imagine was a global pandemic that ended up providing more of a captive audience for the issues he champions than the primary campaign did.

“I look back now and really feel like I was hitting on issues that are more important now during coronavirus,” Ryan said, noting people with heart disease and diabetes are much more vulnerable to severe effects of COVID-19. And he cited the need for trauma-informed care, social and emotional learning in schools, addressing the consequences of stress and anxiety, and reversing diabetes “using food as medicine.” In the primary, Ryan said, “I was talking about health and everyone else was talking about health care. Where’s the conversation about reversing sickness in this country? I was talking about things that are so much more relevant now.”

Ryan doesn’t spend his days on a yoga mat or a meditation cushion. In fact he only devotes 20 minutes a day to his own practice. He’s a husband and father of three, and represents Ohio’s 13th Congressional District, hard hit by the outbreak, where he is finding his constituents struggling with a weak response from Washington to this life-altering emergency. In the coming round of relief funds, Ryan is pushing for hazard pay for frontline workers, student debt relief for essential workers, and a monthly stimulus check. A onetime $1,200 check, Ryan said, has done little to help the nearly 4 million Americans who couldn’t pay their mortgage in April, or the 10% of renters who couldn’t pay rent. His proposal, for taxpayers affected by the economic downturn to receive $2,000 per month for up to a year, is co-sponsored with Rep. Ro Khanna, has received a big boost from Andrew Yang, and is now supported by Sens. Ed Markey, Kamala Harris and Bernie Sanders. It has also been written up in Forbes, and Ryan has been interviewed about it on Fox News Channel and the Fox Business Network.

Yet since the start of the COVID-19 crisis, Ryan has also been interviewed about meditation, mindfulness and well-being on numerous podcasts, the Michael Smerconish radio show on SiriusXM’s POTUS Channel, and has conducted Facebook Live sessions and video conference calls on wellness issues. While he described his presidential campaign as “crazy, complete chaos,” Ryan joked that the coronavirus crisis is “chaos with slippers on.” With so many people stuck at home with more time, he is encouraging everyone to start meditating, or doing breathing exercises, five minutes a day, every day, to reduce anxiety. The pandemic has forced everyone to grapple with the unknown — of now and later. “Suffering comes from the level of certainty you want to have and that really doesn’t exist. It moves the ground you think you’re standing on and it’s amplified because it’s hitting everyone at the same time,” Ryan said.

The unknown will be followed by profound change, which will affect everyone differently. As Americans realize that disruptions to their daily lives from lockdown will be followed by future disruptions and change to systems that once worked well enough but will need rethinking and restructuring,  Ryan sees receptivity to a broader debate about health that will focus on preventing diseases that consume 75% of our health care costs.

In the decade since he started promoting the importance of well-being, and eight years since he authored “A Mindful Nation” (recently reissued as “Healing America”), Ryan has worked with meditation teachers and movement leaders around the country to expand awareness of the benefits of mindfulness. Working with John Osborne’s Project Welcome Home Troops, Ryan has found mindfulness techniques to be especially effective for veterans, helping to mitigate the effects of stress, isolation and depression — from reducing the amount of medications they take to preventing suicides. Ryan also believes these practices work well with young children. He has worked with Laura Bakosh, who created the Inner Explorer program and teaches a 5-10 minute body scan that has produced better grades in science, reading and math, along with increases in average GPA, better behavior and decreased teacher stress.

In October 2018, Ryan helped establish the House Wellness Center, which serves House employees, the Congressional Budget Office, the Architect of the Capitol, and the U.S. Capitol Police. It provides well-being seminars and workshops, coaching on wellness, nutrition and exercise, mindfulness and stress management support with additional resources provided during COVID-19, which has surged participation in these services.

Ryan hopes the aftermath of pandemic will produce new policies and innovation in the public sector that produce better health and wellness outcomes. But he also hopes the crisis will foster more appreciation for our fellow citizens.

“This could shift our view of the world in a way that could be really beneficial,” he said. “We all need each other.”