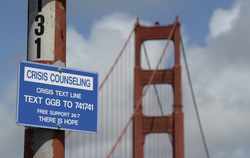 Caring about the public health of our nation as well as the economic health of Americans is not a mutually exclusive proposition. As much attention as the media is rightfully paying to the impact of COVID-19’s toll on the physical well-being of so many Americans, especially those in our most vulnerable populations, we can’t ignore the impact financial pressures, on top of health fears, play on your mental health, especially in times of crisis.

During a recent coronavirus task force briefing, President Trump stated, “People get tremendous anxiety and depression and you have suicide over things like this when you have a terrible economy. You have death, definitely … in far greater numbers than we’re talking about with regard to the virus.” It was a well-placed statement of concern.

A Daily Mail article pointed out that one of the country’s largest suicide hotline call centers, based in Los Angeles, saw a 75% increase in calls in March (1,500 calls) over the previous month. The people were in despair because of the complex fears related to COVID-19.

Lyn Morris, the vice president of clinical operations for Didi Hirsch Mental Health Services, said, “Our history with things like this, like in the 2008 recession, the first couple of weeks it’s a little hard to gauge call volume because everybody’s in shock, taking care of their basic needs first. Then the weeks after are usually when we start to see the call volume really increase. Two weeks from now, we’re probably going to see a big increase as the fear, the anxiety builds, and as the death toll from coronavirus rises we would expect that.”

A Los Angeles Times article headlined “Economic hardship tied to increase in U.S. suicide rates, especially in rural areas” noted that “new research ties high suicide rates everywhere to the unraveling of the social fabric that happens when local sports teams disband, beauty and barbershops close, and churches and civic groups dwindle. But in rural counties, especially, it finds a powerful link between suicide and economic deprivation — a measure that captures poverty, unemployment, low levels of education and reliance on government assistance.”

Continuing to keep America closed for business at every level has the potential to hurt just as many people as this virus itself.

Glenn Jacobs, the mayor of Knox County, Tenn., said: “We have to determine how we can respond to COVID-19 in a way that keeps our economy intact, keeps people employed and empowers them with a feeling of hope and optimism – not desperation and despair.” In just two days, Knox County experienced suicides equaling 10% of its total for all of 2019. Former U.S. Sen. Bob Corker responded to President Trump’s desire to open up the country as soon as possible in a March 24 tweet: “I am glad the debate is now balanced and the understanding of the mid- to longer-term health consequences as a result of suicides, domestic violence, deprivation, and lives of poverty as a result of a prolonged lockdown are being taken into account.”

The bipartisan CARES Act signed by President Trump, and the other actions taken by the administration to not only slow the spread of the virus but slow the economic damage caused by it, will temporarily give relief to many Americans who need it the most. But that temporary relief must be matched with safe solutions to reopen our economy.

Suicide is now the 10th leading cause of death for people of all ages in our country. Mental health is something we must not ignore. In times of hopelessness, we know people can turn to God and their faith, but even that is impacted by places of worship being closed.

For our part at the Republican National Committee, as our voter outreach efforts continue we start each call with a simple “How are you doing?” Just checking in on our neighbors can make a difference, but letting people know there is a plan to help us get back to “normal” after this crisis is even more important.

President Trump understands this multifaceted crisis is a lot for people to deal with emotionally. It is stressful not being able to earn a living and potentially not provide for yourself and your family.

Thankfully, President Trump is doing an excellent job at giving us hope and optimism, saying: “With the grace of God, we are rising to the occasion.  We are proving that no darkness can overshadow the eternal light of American courage.  We will win.  And when we do, we will rebound with astonishing force and speed.”

The president’s Great American Economic Revival Industry Groups are working with him to develop safe action plans for each state to allow Americans to safely re-enter the economy. If you care about the public health and safety of our country because of COVID-19, you must equally care about the economic health and safety of America at the same time. During this unprecedented pandemic, one thing remains certain: We must prioritize innovative, safe and creative ways to get the American economy roaring again. If not, there will be even more casualties.

For more information on how to cope during this pandemic, visit the CDC website. And remember: The 24/7 National Suicide Prevention Lifeline phone number is 1-800-273-8255.

Paris Dennard is a GOP political commentator, strategist, and senior communications adviser for Black Media Affairs at the Republican National Committee. Follow him on Twitter at @PARISDENNARD.