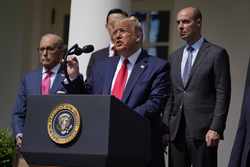 Larry Kudlow kept dabbing his forehead while Steve Mnuchin swayed uncomfortably side to side and beads of sweat slowly made their way down Mike Pence’s face in a sweltering Rose Garden Friday afternoon. The president, meanwhile, seemed not to feel the heat.

The White House called a press conference to highlight a rare bit of good news during a pandemic: The unemployment rate tumbled for the month of May as the economy unexpectedly added 2.5 million jobs. Trump crowed about it for the better part of an hour.

“We’re bringing our jobs back,” he said, beaming broadly. “We’re gonna be back there. I think we’re actually going to be back there higher next year than ever before.”

The coronavirus rippled through the country in the spring and hamstrung much of the economy. Some forecasted that Friday’s new unemployment number would go as high as 20%. Instead, it fell to 13.3% in May from 14.7% in April. According to Trump, the recovery is beginning. “We’ve been talking about a ‘V,’” he said, referencing the sharp statistical curve of his predicted bounce-back. “This is far better than a ‘V.’ This is a rocket ship.”

Graphs showing the good news flashed on television screens as the president spoke, and sensing a bit of heat exhaustion, a White House aide hurried glasses of water to Cabinet members standing nearby.

He said a “job surge” was around the corner, predicting that “next year’s going to be one of the best years we’ve ever had economically.” And the May jobs numbers were a sign of “the greatest comeback in American history.”

It was a stark contrast. Trump has been under fire for his handling of the pandemic for months and boiling racial tensions in the last 10 days. And while he walked away from the press conference without taking questions, he did not escape controversy.

“Equal justice under the law must mean that every American receives equal treatment in every encounter with law enforcement regardless of race, color, gender, or creed. They have to receive fair treatment,” Trump said reading from prepared remarks.

Floyd died on May 25 at the hands of Minneapolis police. The Trump administration has called for an investigation, and Minnesota Attorney General Keith Ellison has brought charges against the four officers involved. A reporter shouted to ask why the president did not “have a plan for systemic racism.” Trump scowled and scolded her for interrupting before sitting down at a nearby table to sign a bill into law that would allow businesses more time to spend coronavirus relief loans.

“I have to say, though, it’s been a great achievement. I feel so good about it. This is just the beginning,” he said. “The best is yet to come.”

Trump has dropped in the polls against Joe Biden as the economy suffered and racial tensions accelerated. The former vice president now leads, 49.3% to 42.2%, in the RealClearPolitics poll average, and perhaps sensing the seriousness of that challenge, Trump took a veiled shot.

“The only thing that can stop us is bad policy — frankly, left-wing, bad policy of raising taxes and green new deals,” he said.  “That will stop it like you wouldn’t believe.”