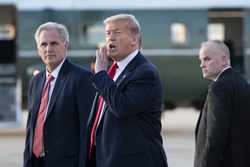 "You want to be politically correct," President Trump said last week to a reporter who refused to take his mask off. Political correctness has long been a foil for Trump. In a 2015 presidential debate, he brushed off a question about his past misogynistic comments by saying, "I don’t, frankly, have time for total political correctness. And to be honest with you, this country doesn’t have time, either." Later in the campaign, when calling for "a total and complete shutdown of Muslims entering the United States," he said his position was "probably not politically correct, but I don’t care."