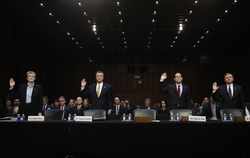 Amid the sound and fury of a pandemic, and a response some label a colossal failure of government, it might be hard to notice what additional damage can be done. But President Trump’s ousting of inspectors general, most notably one named to oversee the already problematic implementation of the more than $2 trillion CARES Act, is precisely the kind of harm emergencies can hide.

Trump’s attack on watchdogs, combined with indications he plans to impede transparency with regard to spending from the largest-ever relief program in U.S. history, is upsetting Republicans who rarely disagree with him publicly. They’re making subtle, constrained attempts to change Trump’s mind but, thus far, are getting nowhere.

The removal of Glenn Fine (pictured, second from right), inspector general at the Pentagon, just days after he was named to oversee the CARES program shocked official Washington, even prompting a rare rebuke from former Defense Secretary James Mattis. Though Trump replaced the Special Inspector General for Pandemic Response (SIGPR) immediately with a political appointee who helped him navigate his impeachment, Fine’s demotion on April 7 was coupled with Trump’s retaliatory firing of the intelligence community IG. That dismissal of Michael Atkinson, who had transmitted the Ukraine scandal whistleblower complaint that led to Trump’s impeachment, was a clear assault on independent oversight of his administration.

Sens. Chuck Grassley, Mitt Romney and Susan Collins joined five Democrats to request an explanation of Atkinson’s termination, noting that Congress wasn’t informed as is required by statute. “Congressional intent is clear that an expression of lost confidence, without further explanation, is not sufficient to fulfill the requirements of the statute,” the letter stated, adding, “Congress intended that inspectors general only be removed when there is clear evidence of wrongdoing or failure to perform the duties of the office, and not for reasons unrelated to their performance, to help preserve IG independence.”

The senators gave the White House until April 13, and still haven’t received a response.  On April 14 two other GOP senators sent a separate letter urging Trump to “send a strong message to the executive branch to work with IGs, not against them,” and offering “suggestions” that IGs be confirmed, independent and empowered. They stressed that IGs always play an important role that is even more critical in a pandemic. “Every dollar wasted or stolen is a dollar not going to save small businesses, protect our health care workers, or provide assistance to those who need it most. … We want to work with you to ensure that the enemy is wasteful government spending, not IGs,” wrote Sens. Rob Portman and James Lankford.

When the White House ignored their letter, Lankford notably told Politico this week the president should play by the same rules his predecessor did. “That’s not really giving Congress the ability to understand the reason,” he said of the silence from the White House. “When the Obama administration did that, they followed back up and said, ‘Here’s why, here’s what.’ We expect the Trump administration to be able to do the same.”

Beyond the removals of IGs, lawmakers fear Trump intends to circumvent accountability and transparency in oversight of billions of corporate bailout funds. First he declared, “I’ll be the oversight,” and then attached a signing statement to the law that potentially undermines the IG monitoring those transactions. Signing statements are often used by presidents to object to portions of bills they don’t veto. The new law requires an inspector general at the Treasury to alert Congress should an agency decline to provide any requested documents. Trump’s statement indicated the IG shouldn’t report to Congress without “presidential supervision,” and that he would not consider “spending decisions as dependent on prior consultation with or the approval of” Congress.

Grassley has worked his entire Senate career to expand and protect the independence of government oversight, from whistleblowers to inspectors general. While he had originally said he had no problem with Fine’s removal – noting that he wasn’t fired and therefore Congress didn’t require notification — Grassley is now asking the president to “reconsider” the statement he made taking issue with the oversight authority written into the CARES Act.

“Read broadly, this interpretation could be cited as authority to unduly strip IGs of their fundamental ability to timely report waste, fraud, abuse and misconduct in government programs to Congress,” he wrote. Appealing to Trump’s own slogan to “drain the swamp,” Grassley noted IGs are “critical to Congress’ and the public’s ability to hold out-of-control bureaucrats accountable,” and added: “Watchdogs that can’t bark are only good for sitting on the front porch.”

Republicans, like Democrats, are also concerned Trump is placing loyalists and political appointees in what are supposed to be apolitical positions. Two days after Trump removed Atkinson, an IG report from the Department of Health and Human Services on failures of the government to supply hospitals with necessary protective equipment and coronavirus tests enraged the president. In addition to attacking the findings on Twitter as “another fake dossier,” he accused the Principal Deputy Inspector General Christi Grimm (who replaced an acting IG in January) of being politically motivated. “It’s just wrong. Did I hear the word ‘inspector general’?” Trump said at a press briefing, adding, “Could politics be entered into that?” Grimm has served in Republican and Democratic administrations and was appointed by Trump.

Amid a public health crisis, there has not been a permanent inspector general at HHS since last June. With 1,600 staff overseeing more than 100 programs, the HHS Office of the Inspector General is the largest in the federal government.  Given the massive infusion of rescue dollars being routed to hospitals as well as a scramble to find a vaccine or therapeutic treatments and to improve and expand testing, HHS is facing complex challenges. A congressional investigation is now underway into the firing of Dr. Rick Bright, the chief of the Biomedical Advanced Research and Development Authority, who said he was removed over his objections to the promotion — by President Trump and others — of a malaria drug unproven in the treatment of COVID-19.

Meanwhile, the Congressional Oversight Commission, tasked with safeguarding $454 billion in Federal Reserve loans, has only one appointee at this point, working without staff, according to his Twitter feed. Treasury announced it would use $195 billion to support loans issued by the Fed and the lone commission member — Bharat Ramamurti — has concerns the money is being given without any conditions or restrictions on stock buy-backs or executive compensation. He wrote a letter to the Fed Chairman Jerome Powell and Treasury Secretary Steven Mnuchin asking for details of all transactions processed thus far.

Rep. Jim Cooper (D-Tenn.), a member of the House Oversight Committee who has introduced legislation to protect inspectors general, is concerned that the $454 billion could be leveraged into $4.5 trillion and that abuse of those funds could be well underway. “I love the Federal Reserve, but you don’t want the only recipients to be Donald Trump’s friends, and right now that’s possible,” Cooper said.

Cooper conceded that “Congress is struggling” to work remotely and its current attempts at oversight cannot replace what IGs must be doing right now inside the executive branch. His legislation to bolster IG protections — included in a 2007 bill but removed at the objections of President George W. Bush — would provide them with seven-year terms and prohibit their firing without cause. He said that “all presidents have hated IGs,” but that they play a critical role, which must begin immediately. Cooper noted the Truman Committee, created by the U.S. Senate in 1941 to oversee defense contracting and spending, “convened at the start of the war, not the end, and it was amazingly powerful, their oversight.”

Cooper contends IGs are the linchpin to government’s protection of taxpayer dollars. “No one else is able to collect information in real time inside agencies, and that makes a big, big difference,” he said.

In his resignation letter, Atkinson defended his actions in transmitting the whistleblower complaint that invited retaliation from President Trump. He encouraged any employee or contractor of the government to come forward if they have discovered “unethical, wasteful or illegal” conduct in the federal government. “The American people deserve an honest and effective government. They are counting on you to use authorized channels to bravely speak up. … Please do not allow recent events to silence your voices.”

As the Trump administration intimidates them, whistleblowers and watchdogs will be counting on the Republicans in Congress to bravely speak up for them. After all, Trump doesn’t like dogs, and doesn’t want them anywhere near the front porch.