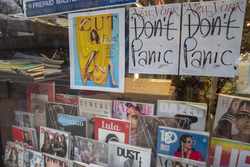 Journalists make mistakes, and I’m no exception. Last week, I misspelled the name of a source in a story I wrote by omitting a letter from his last name. It didn’t alter the information I was reporting and was fixed within an hour or two. The editor appended a correction at the bottom of the story noting the exact nature of the error and the time it was corrected.

There’s an argument that this level of transparency is unnecessary for a single misplaced letter, but I think it’s laudable – especially at a time when media outlets are increasingly unwilling to issue corrections when they are obviously needed. It seems as though the bigger the mistake a publication makes, the more it resists transparency and accountability.

Last week, Vanity Fair had nice little scoop, or so it thought. Gabriel Sherman, whose title is special correspondent, authored an article premised on a major bit of news – investors aligned with Donald Trump Jr. had purchased a stake in the pro-Trump, conservative news outlet One America News Network (OANN).

This was news to Charles P. Herring, president of OANN’s parent company, who fired off a letter to Vanity Fair owner Conde Nast demanding a retraction and an apology. “The facts are undisputable and in direct conflict with your false and defamatory statements,” he wrote. “Herring Networks, Inc. has not sold ANY stake in One America News Network or its company to anyone or any entity, period.”

Vanity Fair quickly recast Sherman’s story without acknowledging its error: “This post has been updated to include a denial from Blackstone, and to reflect comments received after publication by Charles P. Herring, president of Herring Networks, OANN’s parent company.” In sum, Sherman based his piece on a premise that was wrong, and Vanity Fair merely acted as if all the story needed was a minor update.

In December of 2017, The Washington Post ran an explosive story about how Russian hackers had penetrated America’s electrical grid. However, the utility companies allegedly implicated in the hack denied the story very quickly after it appeared. At Forbes, Kalev Leetaru soon wrote a disturbing report showing how the Post had failed to reach out to the utilities they were writing about before publication. The paper compounded the problem by editing the story after publication to try and gloss over the errors without being transparent. When questioned about its editing practices, the Post issued several squirrelly statements trying to save face.

Such post-publication “stealth editing” has become the norm. Last month, The New York Times published a story on the allegation that Joe Biden sexually assaulted a former Senate aide. After publication, the Times deleted the second half of this sentence: “The Times found no pattern of sexual misconduct by Mr. Biden, beyond the hugs, kisses and touching that women previously said made them uncomfortable.”

In an interview with Times media columnist Ben Smith, Times’ Executive Editor Dean Baquet admitted the sentence was altered at the request of Biden’s presidential campaign. However, if you go to the Times’ original story on the Biden allegations, there’s no note saying how the story was specifically altered or why.

This isn’t the first time the Times has surreptitiously edited politically sensitive stories. In 2016, supporters of Bernie Sanders’ presidential campaign were outraged by a piece that positively highlighted his legislative record – before it was substantially edited after the fact to downplay his accomplishments. Among other changes, edits included the addition of two paragraphs critical of the senator without noting any changes had been made.

In this instance, the Times denied editing the Sanders story because of pressure from a campaign. But since Times editors, along with many other publications, have made it clear that they don’t feel the need to inform readers how and why they make substantial changes to stories, what incentive do readers have to trust them when they say they have no ulterior motives? Further, it makes readers wonder how many questionable or deceptive editing decisions go unnoticed.

It’s also impossible not to note how this failure to issue proper corrections and penchant for stealth editing goes hand-in-hand with the media’s ideological preferences.

In 2016, following an Islamist terrorist attack on a gay night club in Orlando, The New York Times reported, “A Republican congressman read his colleagues a Bible verse from Romans that calls for the execution of gays.” Of course, there is no verse that comes close to saying this in Romans or anywhere else in the New Testament.

The verses in question do single out homosexuality as a sin, but they must be read in context. Homosexuality is just one among many sins that are singled out, such that the verses indict everyone: “all unrighteousness, fornication, wickedness, covetousness, maliciousness; full of envy, murder, debate, deceit, malignity; whisperers, backbiters, haters of God, despiteful, proud, boasters, inventors of evil things, disobedient to parents… they which commit such things are worthy of death.”

In other words, that “the wages of sin is death” is basic Christian doctrine – and even accepting that many Americans find labeling homosexuality a sin offensive, the idea that there’s a specific call for Christians to go out and execute gay people is ignorant and absurd. Despite being called out repeatedly, this error remains uncorrected. For the biblically literate, there’s a rich irony at play here: In order to believe that the New Testament calls for Christians to murder gays, you have to ignore that forgiveness of sins is Jesus’ primary message – and the first step toward forgiveness is confessing you did something wrong.

In the end the media’s refusal to run corrections is a damnable practice for reasons that have nothing to do with Christianity. In an era when large majorities of the public routinely tell pollsters they don’t trust the media, you don’t have to be a Bible-thumper to see that admitting your mistakes promptly, being transparent about trying to correct them, and when appropriate, apologizing and asking for forgiveness – are good secular, professional ethics.