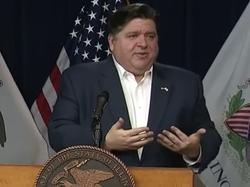 Dressed in a FEMA jacket with a white button-down shirt and no tie, the go-to uniform for state executives dealing with disasters, J.B. Pritzker said again that Illinois had been abandoned by the federal government.

“I have not been counting on the White House because there have been too many situations in which they’ve made promises and not delivered,” the Democratic governor insisted Sunday on CNN.

“Very recently, they promised a lot of swabs. They’re supposed to arrive today, the first shipment of those. I’m looking forward to that, but what we’re doing is we’re going it alone, as the White House has left all the states to do.”

The Trump administration does not take kindly to that assertion, and it shared some receipts with RealClearPolitics. Since the beginning of the pandemic, FEMA has obligated nearly $230 million from the Stafford Act to the state on top of billions of dollars in various aid from other agencies. For overlooking that money, the governor earned another rebuke.

“Unfortunately, Gov. Pritzker’s need to play politics has clouded his ability to tell the truth once again,” White House Deputy Press Secretary Judd Deere told RCP, noting that federal officials have been on the phone repeatedly to “conduct multiple rounds of testing technical-assistance calls with Illinois.”

And then, perhaps the sharpest attack on the executive to date: “Most governors were quick to manage their state’s existing testing capacity; Governor Pritzker was quick to find a TV camera and attack the president.”

The governor did not respond to a request for comment. He has, however, been a vocal critic and regular cable news guest since the first case of COVID-19 was confirmed in Illinois on March 19.

Nearly two months later, the total number of  cases in his state exceeds 83,000. A feud has followed between the federal and state executives who both insist the other is incompetent. The White House argues that Pritzker has “delayed the implementation of existing testing capacity and refused to follow the recommendations of the federal government.” The governor says that Trump has “done very little” to protect medical workers fighting the virus.

The federal government has sent the state plenty of the things needed to fight a pandemic: More than a 1.5 million surgical masks, nearly 3.5 million N95 respirators, and over 6 million pairs of gloves, along with face shields and medical gowns and assorted personal protective equipment. According to a memo obtained by RCP, FEMA has crated and sent everything from bleach and biohazard bags to thermometers and testing equipment to Illinois.

The state has already received 15 Abbot testing machines, and more are on the way. According to FEMA, Illinois has made 66 requests for testing supplies since May 10. The federal government has subsequently made 24 deliveries of testing supplies to the state. It has approved another 25 requests and is working obtain the supplies needed to fulfill them. Additionally, 16 more requests are being evaluated by the agency.

The FEMA inventory list represents the outline of an ugly fight with each delivery date marking a chapter in the feud between the governor and the president. Pritzker isn’t alone, of course. Trump has warned that someday he will name all the governors who didn’t perform up to his standards. Pritzker is somewhere at the top of the list, undoubtedly.

While the coronavirus is apolitical, the crisis is not. Careers are launching and crashing around the country as the drama plays out, and few have been as vocal or colorful as Pritzker. He has so little trust in Trump, whom he likens to “a carnival barker,” that he chartered a private jet to deliver medical supplies to his state from Shanghai. He kept the flight path a secret for fear the feds would seize the cargo. Details still leaked to The Chicago Sun-Times.

All of this plays well in Illinois, a state that Trump lost by double digits in the last election. According to an Ipsos survey for the Washington Post, 71% of that electorate said they approved how the governor has handled the disease. Another 27% disapproved.

Other Democrats have made peace with Trump, and he has even received occasional praise from Gov. Gavin Newsom in California and Andrew Cuomo in New York. Pritzker holds out. He is not on speaking terms with the president. Negotiations have not broken down between Illinois and the White House, though. A spokeswoman for Mike Pence told RCP in April that the vice president makes the calls to Springfield. Aid, meanwhile, continues to flow to the state.

Correction: An earlier version of this story stated that the total number of coronavirus cases in the U.S. has topped 79,000. In fact, that was the number of cases in Illinois (which stands at 83,021 as of midday on May 13).