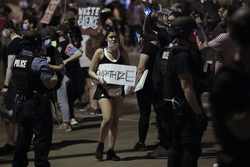 If you didn’t know us, you wouldn’t think we had much in common. Antjuan is black, Jessica is white. We’re different genders and he was raised in the South and she’s from the North, where we still live. Our families have vastly different histories and work in professions that couldn’t be more dissimilar. Jessica is a secular Jew and Antjuan a practicing Christian. And although we both wear the same blue Democratic Party jersey, there are times our politics don’t match up either.

What unites us, though, is a common desire to make the American experiment better, to fight against racism, bigotry and hate. Most of all, at this critical moment in our nation’s history, we are united in placing value on the lives of African Americans because black lives matter.

We’ve been through this before. The critical difference? Cellphone recordings. Much discussion has focused on the fact that the murders of black Americans at the hands of white Americans are only getting this level of attention because we can see it. That said, we continually watch these episodes in requisite horror and then fail to create the substantive change to ensure that we don’t have another Trayvon Martin, Philando Castille, Botham Jean, Atatiana Jefferson, Breonna Taylor or Ahmaud Arbery.

George Floyd’s death is Derek Chauvin’s fault and we welcome the news that Minnesota Attorney General Keith Ellison has increased the charge to second-degree murder and charged the other three officers involved. But George Floyd’s death also falls on the rest of us who did not work hard enough to create circumstances in which it could have been avoided.

We don’t want to sound like a couple of Pollyannas, but we do want to sound the alarm that millennials and Gen Z Americans will not accept the America of our grandparents or even our parents. Recognition of systemic racism is core to our generation, no matter our color. It is part and parcel of a progressive agenda that tackles health care, student debt and climate change, too. Leaders risk further alienating young voters without bold, decisive action.

The appetite to protest among younger Americans will not dissipate. The promise of America means something very different to us. We do not feel we must accept her faults but, rather, must put in the work to change those faults. There are a number of far-reaching reform proposals worthy of serious consideration that will satisfy Americans hungry for change.

The Congressional Black Caucus’s package of policing reforms includes a chokehold ban, review of police training standards and reform of the legal doctrine that shields police officers from legal liability. About the reform package, which will be available soon, CBC Chair Karen Bass commented, “We are going to do everything we can, while the nation has a height of awareness to the issue, to pass transformational legislation. We want to make sure that, in this time period, we are very visible so that African Americans around the country understand this is our experience as well.”

Presumptive Democratic presidential nominee Joe Biden has called on Congress to take first steps on policing reform this month. In a speech in Philadelphia this week, Biden voiced his support for House Democratic Caucus Chair Hakeem Jeffries’ bill that bans chokeholds. The former vice president also called for a halt of the transfer of weapons of war to police departments, to improve oversight and accountability and to create a model use-of-force standard.

More proposals will undoubtedly come as nationwide protests continue, and it is our hope that George Floyd’s death will be the watershed moment it should be. Although there has been condemnation of Floyd’s shocking killing on both sides of the aisle, this is familiar territory. What looks like a moment of understanding and unity among politicians quickly devolves into partisan bickering and we end up with no substantive change and, as a consequence, another terrifying incident within weeks.

That cannot be the case this time around. It shouldn’t have been the case any other time, but that we are witnessing protest levels not seen since 1968 indicates that we need solutions on the 1968 level. Younger Americans will accept nothing less.

We can’t help but think about how the history of black Americans who have lost their lives this way will be taught. Emmett Till is remembered by many, but will Floyd be also? Floyd’s girlfriend and daughter were interviewed on CBS by Jamie Yuccas, and afterwards Gayle King commented that she hopes Floyd’s daughter gets to grow up knowing that her father changed the world.

If you look outside your windows this evening, it looks like he already has. Now we need reforms to match the impact his tragic end has had on the American psyche.

Antjuan Seawright is a Democratic strategist, founder/CEO of Blueprint Strategy, and a CBS News political contributor.

Jessica Tarlov is head of research at Bustle Digital Group and a Fox News contributor. She earned her Ph.D. at the London School of Economics in political science.